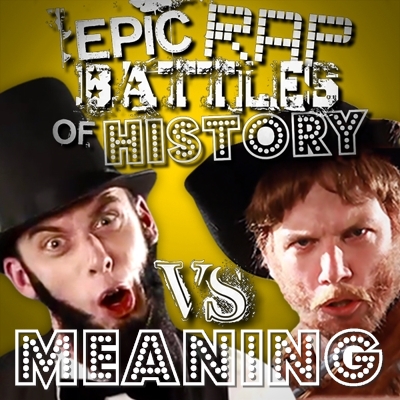 Four score and sixty-five years in the past,

(Lincoln's famous Gettysburg Address begins with "Four score and seven years ago…" In the battle, four score and 65 years means 145 years ago, which, at the time of the battle's release, was how long it had been since the Civil War ended.)

I won the Civil War with my beard! Now I'm here to whup your ass!

(Those 145 years ago, Abe Lincoln led the Union to victory in the American Civil War, and he claims that he did this with his beard, which is one of his most well-known characteristics. He was the first president to grow a beard, as an 11-year old girl named Grace Bedell had written him a letter to do so, and it is considered that because he did, it may have had a positive impact on his victory during his presidential campaign. Now, he has come to beat Chuck Norris as he did with the Confederates during the Civil War.)

I've read up on your facts. You cure cancer with your tears?

("Chuck Norris facts" are a very popular meme on the Internet; they are exaggerations of Norris' strength, as he usually did amazing stunts in his movies. Curing cancer with tears is a popular Chuck Norris fact, saying that Chuck Norris never cries, so his tears, if shed, are able to cure cancer, which is yet to be cured.)

Well, tell me, Chuck. How come you never sat down and cried on your career?

(Lincoln says that if Norris can cure cancer with his tears, he should cry about his acting career, which Lincoln considers awful, as he stopped appearing often in movies and television shows after the 1990s.)

You're a washed-up has-been, on TV selling Total Gyms,

(Lincoln is calling Norris a sellout because he advertised for the "Total Gym"[1], a multi-purpose exercising machine.[2])

And you're gonna lose this battle like you lost Return of the Dragon!

(In the movie Return of the Dragon, Chuck Norris lost a battle against Bruce Lee.[3] He is particularly renown for this scene, and it is often used as a rebuttal to Chuck Norris facts.)

I'll rip your chest hairs out, put 'em in my mouth.

(In the same battle, Lee ripped Norris' chest hairs out and blew them from his hand. Lincoln would chew them up and spit them out.)

(Lincoln defeated the South in the American Civil War, and he plans on doing the same to Norris.)

I never told a lie, and I won't start now!

(Lincoln was also known as "Honest Abe" since he never told a lie.)

You're a horse with a limp; I will put you down!

(Horses with limps are often put down (killed) because of the high medical costs, and to end their suffering. Lincoln compares Norris to a hobbled horse and vows to defeat him.)

(Lincoln's troops had a huge victory in the battle of Gettysburg, a turning point in the Civil War. Norris is saying this battle is nowhere near that.)

For I invented rap music when my heart started beating.

Chuck Norris doesn't battle; he just allows you to lose.

(Another joke about Chuck Norris about how he won't need to battle; he says Lincoln already lost just for being against Chuck Norris, who, according to him, never loses.)

My raps will blow your mind like a verbal John Wilkes Booth.

(John Wilkes Booth was the man who assassinated Abe Lincoln by shooting him in the head, literally "blowing his mind". Norris claims his raps will also blow Lincoln's mind in astonishment.)

I've got my face on the side of a mountain. You voted for John McCain!

(Abe Lincoln's face is carved on Mount Rushmore. Like Lincoln, Chuck Norris is also a devoted member of the Republican party. Lincoln points out that Chuck Norris, despite being a tough person who doesn't lose, voted for John McCain, the losing presidential nominee.)

I've got a bucket full of my head, and I'm about to make it rain!

(Lincoln holds a bucket full of pennies, which have his face printed on them. In strip clubs, people "make it rain" by throwing stacks of money to the dancers. Lincoln will do the same, but with pennies, which would be more uncomfortable.)

You block bullets with your beard? I catch 'em with my skull!

(Yet another jab at Norris' "Facts" says that Norris' beard is tough enough to stop any oncoming bullets. Lincoln got shot in the head, so he "caught" the bullet with his skull, making his skull better at catching bullets than Norris' beard.)

I'd make fun of Walker, Texas Ranger, but I've never even seen that show!

(Walker, Texas Ranger is a TV show starring Chuck Norris. Lincoln is saying that he would taunt the show, but he decided not to see it, likely because it wasn't worth his time.)

I am Chuck fucking Norris!

(Chuck Norris is angry that Lincoln can think he can beat him, as he is an all-powerful.)

(This was made to sound like a Chuck Norris fact. "Forty score" is another reference to the beginning of Lincoln’s Gettysburg Address. A "score" describes twenty things, so forty score is 800. Chuck says he has spread more blood and gore in his career than there would be in 800 Civil Wars. There is an estimated amount of 620,000 soldiers killed in the Civil War, which means that Chuck has spilled the blood of 496 million people, a ridiculously large number.)

I split the Union with a roundhouse kick!

(The Union was led by Abe Lincoln during the Civil War. A roundhouse kick is a martial arts (Tae Kwon Do) move, in which Norris claims to be skilled in. It's often considered his signature move.)

I wear a black belt on the beard that I grow on my dick!

(According to Chuck, Even Norris' dick has its own beard, and he wears a black belt on it.)

I attack sharks when I smell them bleed!

( When sharks smell blood, they normally attack, but according to Chuck, he can attack it faster once he smells the blood on it.)

I don't go swimming; water just wants to be around me!

(Chuck Norris claims that he doesn't actually enter water, it just wants to be around him.)

My fists make the speed of light wish that it was faster!

(The speed of light is the fastest thing in the universe, but according to Chuck Norris, it still can't beat the speed of his fists, and it wishes it was quicker.)

You may have freed the slaves, but Chuck is everyone's master!

(Abe Lincoln won the Civil War, resulting in the abolishing of slavery. Despite Lincoln freeing the slaves with the Emancipation Proclamation, and eventually the Thirteenth Amendment, Chuck Norris states that we are all still inferior slaves of him.)

Retrieved from "https://epicrapbattlesofhistory.fandom.com/wiki/Abe_Lincoln_vs_Chuck_Norris/Rap_Meanings?oldid=1472441"
Community content is available under CC-BY-SA unless otherwise noted.