Adolf Hitler battled Darth Vader in Darth Vader vs Hitler and Hitler vs Vader 2. He also battled Vader and Boba Fett in Hitler vs Vader 3. He also made a brief cameo appearance in Nice Peter vs EpicLLOYD. Furthermore, he has appeared in the trailer for seasons 2 through 4: frozen in carbonite in Season 2, in the Rancor Pit in Season 3, and as a ghost in Season 4. He was portrayed by EpicLLOYD on all occasions.

Adolf Hitler was an Austrian-born German politician who became leader of the Nazi Party. From 1933 to 1945, he was Chancellor of Germany and Führer of Nazi Germany from 1934 to 1945. Hitler was at the center of Nazi Germany, World War II in Europe, and the Holocaust. Hitler's supremacist and racially motivated policies resulted in the deaths of an estimated 50 million people during World War II, including 6 million Jews and 5 million "non-Aryans" whose systematic extermination was ordered by him or by his close subordinates. A prominent example of the dictator as we know it in the modern sense, his actions of utter ruthlessness and destruction of human lives have made him one of the most infamous leaders and mass murderers in history.

A decorated veteran of World War I, Hitler joined the German Workers' Party — precursor of the NSDAP — in 1919, and became its leader in 1921. In 1923, he attempted a coup d'etat in Munich, known as the Beer Hall Putsch. The failed coup resulted in Hitler's imprisonment, during which time he wrote his memoir, Mein Kampf, which ironically, was published by a Jew, who later died during Operation Hummingbird. His 1924 release was followed up by him gaining popular support by attacking the Treaty of Versailles and promoting Pan-Germanism, antisemitism, and anti-communism with charismatic oratory and Nazi Propaganda. After his appointment as chancellor in 1933, he transformed the Weimar Republic into the Third Reich, a single-party dictatorship based on the totalitarian and autocratic ideology of Nazism.

Hitler's plan was to establish a New Order of absolute Nazi German hegemony in continental Europe. To this end, his foreign and domestic policies had the aim of seizing Lebensraum for the Germanic People. He directed the rearmament of Germany and the invasion of Poland by the Wehrmacht in September 1939, resulting in the outbreak of World War II in Europe. Under Hitler's rule, in 1941 German forces and their European Allies occupied most of Europe and North Africa. In 1943, Germany had been forced onto the defensive and suffered a series of escalating defeats. In the final days of the war, during the Battle of Berlin in 1945, Hitler married his long-time partner, Eva Braun. On April 30, 1945, less than two days later, the two committed suicide to avoid capture by the Red Army, and their corpses were burned.

Guten Tag, I'm zee man everyone lovez to hate. I'm ein terrible writer, horrible painter and probably zee verst person to ever live. I was zee Commander of Nazi Germany, also known as zee "Third Reich" and commander of the armed forces, including the Luftwaffe (air force). Some say I had a Napoleon Complex, probably because I only had one testicle. I blamed zee Jews for every problem I could zink of und so I tried to exterminate zem all. I started Vorld Var II by invading Poland because all zee zokes made me think they vere a dumb people. I made everyone Heil me and valk like idiots, by goosestepping everywhere. Oops! Of course, I lost. I didn't do much right at all. I even ruined anyone being able to rock a little mustache like mine in zee future. Sorry, everyone! Hitler's bad! Auf wiedersehen!

Hitler danced next to EpicLLOYD during the line "Everyone knows your page is just the place the rap battles live!" He then later appeared next to Nice Peter during the line "I drew a mustache on your face and you played a mean Hitler."

[Note: Adolf Hitler is in brown, while Stephen Hawking is in regular text.]

Because you're standing over the rancor pit.

I am Adolf—! *lightsaber sound* Hitler…

You're a far cry from beating me with that desert butthole in carbonite!

I have friends from Hugo Boss all the way to IKEA.

Adolf Hitler being cut in half in Hitler vs Vader 3

Hitler being trapped by the Ghostbusters

Hitler frozen in carbonite in Dis Raps For Hire - Episode 8 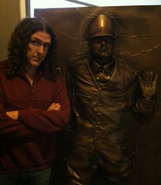 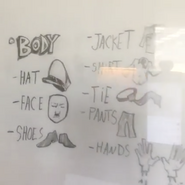 A sketch of Hitler's costume made by Mary Doodles 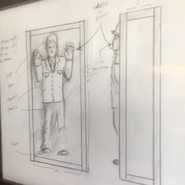 A sketch of Hitler frozen in carbonite made by Mary Doodles

Lloyd being transformed into Hitler in the make-up room

The symbol on Hitler's armband.
Community content is available under CC-BY-SA unless otherwise noted.
Advertisement