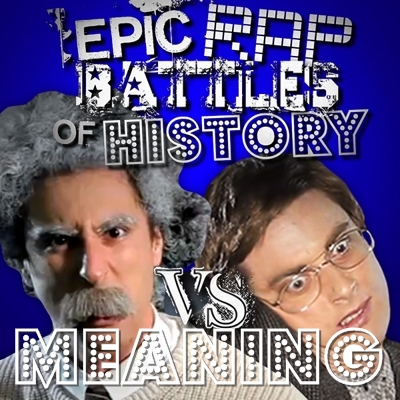 When I apply my battle theory, minds are relatively blown,

(Play on words using Einstein's theory of relativity. When he applies his rap battle plan, minds are blown. It could also mean his technique is smarter than an average person, so it would blow their minds away.)

So take a seat, Steve. Oop! I see you brought your own.

(To "take a seat" is a phrase saying that one person sits down while the other person demonstrates. Stephen Hawking has amyotrophic lateral sclerosis (ALS), which has paralyzed him. Because of this disability, he gets around in his wheelchair and uses a computer to speak, because he can't do either by himself. Einstein suggests that Hawking take a seat while he shows Hawking how to battle; however, Einstein catches himself tripping over the fact that Hawking is already in a seat, his wheelchair.)

What's with your voice? I can't frickin' tell!

You sound like Wall-E having sex with a Speak & Spell!

(Hawking's voice is emitted by a computer, which is like two highly mechanized voices combined. Wall-E is a robot from his self-named movie who talks in a high pitched voice. A Speak & Spell is a toy with a mechanized voice, so Hawking's computerized voice sounds like a strange mix of the two.)

(To school someone means to educate them in an area they were previously ignorant in, showing intelligent superiority to them. MIT and Oxford are both prestigious universities Hawking is affiliated with, and Einstein says that he will beat Hawking in both schools and anywhere in between.)

All your fans will be like, "Um, that was Hawk-ward!"

(This is a pun on Hawking's name, mixing "Hawk" with "awkward". Einstein says that after he is finished schooling Hawking, his supporters will feel surprised to see their idol fall below Einstein's level.)

I'm as dope as two rappers! You better be scared,

(Einstein warns Hawking that he should be afraid of him because he's as good as two rappers. This is also a reference on the Banach–Tarski paradox, which states that an object can be decomposed and reassembled into two objects identical to the first.)

(Rappers are also known as MCs. Therefore, if Albert Einstein is equivalent to two rappers, as stated in his previous line, then Albert E = mc2. This plays on Einstein's theory for converting mass to energy, E = mc2. When saying squared, this means you are multiplying something by itself twice. )

You've got no idea what you're messing with here, boy!

(By challenging Hawking to a rap battle, Einstein has no idea what he's gotten himself into.)

(Hawking is in a wheelchair, so he says that his wheels have 12" rims, a reference to car wheel rims. Also a play on words: his wheels are how he rolls, literally and figuratively.)

You look like someone glued a mustache on a troll doll!

(Einstein was known for having wild hair and a mustache. Troll dolls are generally ugly and have crazy hair, so Hawking says that Einstein looks like a troll doll with a mustache.)

I'll be stretching out the rhyme, like gravity stretches time,

(In Einstein's Theory of General Relativity, the more gravity acting on an object, or the higher velocity an object travels at, the slower time goes. Here, Hawking says that he can "rap" as slow as he wants and to Einstein, it will seem faster than Einstein can do.)

When you try to put your little p-brane against this kind of mind!

(A p-brane is a spatially extended mathematical concept that appears in string theory and related theories, which Hawking studied. Also a play on Einstein having a brain the size of a pea, as Einstein's brain was shown to be physically smaller than the average size, and against Hawking's mind, it doesn't stand a chance.)

I'm the best! I'm the Snoop Dogg of Science!

(Hawking considers himself to be supreme and the best in the face of science and rapping, comparing himself to the legendary rapper, Snoop Dogg.)

I'll be dropping mad apples on your head from the shoulders of giants!

(Apples are the symbol of gravity, which comes from when Isaac Newton studied gravity after being hit by an apple under a tree. "From the shoulder of giants" is a scientific term that means to take work from another genius. It also refers to Hawking's book On the Shoulders of Giants.)

I'm the giant whose shoulders you'd have stood on, if you could stand!

(Einstein says that he is the genius that Hawking based his work on. Also another disability joke about how Hawking is unable to stand.)

I'll give you a brief history of pain with the back of my hand!

(Einstein will slap Hawking across the face. A pun on the name of Hawking's book, A Brief History of Time.)

You can't destroy matter or me, for serious!

(Based on the law of conservation of mass, matter is indestructible, and apparently, so is Einstein.)

Ripping holes in you bigger than the hole in your black hole theory was!

(Hawking's black hole theory had a big hole in it and was proven to be flawed. Einstein's theory on black holes was that if an astronaut entered a black hole, they would enter the event horizon, referring to the point of no return, until they were pulled apart inside the black hole. In 1974, Hawking claimed that it was possible for an object to escape a black hole through what became known as Hawking Radiation, however, the information of the object would be scrambled that it would be difficult to determine what object had entered the back hole. This theory contradicted the quantum theory which outlines that information is not destroyed and it is possible to determine the object. Hawking then admitted in 2004 he was wrong about information loss. Einstein says that he will rip holes in Hawking bigger than the holes in his theory of black holes.)

(Hawking states that there is a huge number of particles in the observable universe. Also, in Hawking's book, A Brief History of Time, he'd refer to really big numbers by repeating the word million over and over again. This number Hawking speaks of is technically known as a septendecillion which is 1054.)

Your mama took the ugly ones and put them into one nerd!

(Out of all those particles, Einstein's mom took the ugly ones and put them into him, calling Einstein an ugly nerd.)

You wanna bring the heat with the mushroom clouds you're making?

(Hawking challenges Einstein to "bring the heat", or to attack him with all he's got to finish the battle. Einstein helped create the atomic bomb, which makes mushroom clouds when dropped. The clouds themselves don't create heat, so Hawking is, in effect, calling his opponent weak.)

I'm about to bake raps from scratch like Carl Sagan!

(Carl Sagan is another famous scientist. This line paraphrases Sagan's famous quote, "If you wish to bake an apple pie from scratch, you must first invent the universe." Hawking says he will come up with rhymes off the top of his head.)

And while it's true that my work is based on you,

(Hawking admits that he based his work off of Einstein's work, but...)

(...Hawking is comparing his brilliant genius to that of a super computer, while Einstein's compares to a fairly average graphing calculator that is required for high school algebra classes. Hawking may be calling himself a super computer as a reference to the computer he relies on to work.)

Retrieved from "https://epicrapbattlesofhistory.fandom.com/wiki/Albert_Einstein_vs_Stephen_Hawking/Rap_Meanings?oldid=1425617"
Community content is available under CC-BY-SA unless otherwise noted.