Alexander the Great vs Ivan the Terrible 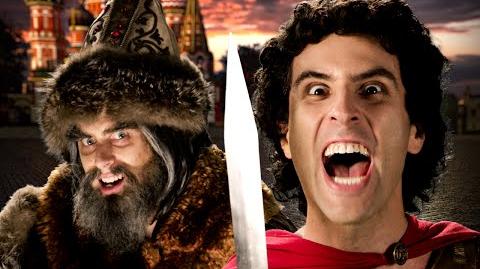 Alexander the Great vs Ivan the Terrible is the sixty-fourth installment of Epic Rap Battles of History and the sixth episode of Season 5. It features the first Tsar of All Russia, Ivan the Terrible, rapping against Macedonian king and warrior, Alexander the Great. Later, he is interrupted by Prussian king, Frederick the Great, Roman consul, Pompey the Great, and Russian empress, Catherine the Great. It was released on July 12th, 2016.

Nice Peter as Ivan the Terrible

Zach Sherwin as Alexander the Great

EpicLLOYD as Frederick the Great

Meghan Tonjes as Catherine the Great

EpicLLOYD as Joseph Stalin, and Mikhail Gorbachev (all reused footage)

Mike Betette as Pompey the Great

The Jay Brothers as Catherine the Great's backup dancers

Try to serve Ivan: no surviving!

You're a land rover; I'm a land expander.

Here to hand you your first loss, Alexander!

Smack you harder than you hit that bottle!

You're nothing but an overrated lush; I'll crush ya!

I'm the first Tsar of all of Russia!

You're an asshole with an anastole!

So don't even try to approach the God,

But now you got the Panhellenist from Pella hella pissed!

I brought foes to their knees in Phoenicia!

Breezed through Gaza to Giza!

Had the Balkans, Persia, Syria, Iraq,

And Pakistan in my expansion pack.

While you died in the middle of a game of chess,

You got vodka bars: flavorless!

And what I'm 'bout to spit will be the craziest,

So go fix me a drink so I can stay refreshed!

Kudos! Greek for the glory I got

From winning every single war that I fought!

So this will be straightforward: I'll take up this sword that I brought

And slice you in half like the Gordian knot!

And I'll soar to the top

In the helmet that I wore

As I swatted my many enemies; shattered 'em like a porcelain pot,

And they'd be praying for the torture to stop (ah!),

Until their vocal cords were torn up and shot!

And I would holler "Bucephalus!", hop on my horsey, and trot!

Enough! (Ugh.) I don't stand a chance against your skills!

There's no great who could defeat this Russian!

(Psst!) What about a flute-busting Prussian?

I'm Frederick the Great! Out the gate, first servant of state!

Hard as steel on the field, genteel in the palace!

Russia's fucked up, but no wonder why!

With your tundras and taigas and bears! Oh my!

I would pay a guy to tear out my eyes

If I had to look at your troll face every night!

Now, bring me my chair!

I'm weary from tearing you a new derrière from here to Red Square!

Fought a Seven Years' War; I ain't scared of a Tsar

'Cause beating you only took me twelve bars!

Oh, what a humiliating defeat!

I know when I am beat, so of course, take a seat!

(Hmm.) My expectations were a lot higher,

But at least I saved the rubles on the garrote wire.

'Cause no great can beat me! What about me, Pompey? Yeah!

[Pompey the Great is decapitated by Catherine the Great.]

It takes a Russian to take down a Russian. I'm Cat; I'm a cat; you're a rodent!

How are you the head of our state when the state of your head was such a crazy one?

(Oooh!) You're unbalanced like I unbalanced the European powers with the wars I waged!

I brought the Russian empire straight out the olden days and right into the golden age!

I'm the boss bitch that you just can't meddle with!

This whole battle's like Alaska 'cause I settled it!

(Mmm.) What a beautiful queen to beat me in a battle.

Accept this gift, Your Highness. I hear you enjoy the saddle!

That horse story is a pile of shit,

Though I do keep 'em chomping at the bit,

But you're never gonna get it, nyet!

Couldn't spin in my chamber if this were Russian roulette!

I'm picking up where Peter the Great left off!

Bringing sexy back to House Romanov!

I'm an immortal: a military authority!

My sortie's plots are studied and pored over and taught!

I would keep the heat of the battle so scorchingly hot!

I grew my empire borders way more than a lot!

As I swatted my many enemies with muscles that were forceful and taut!

They were screaming till they're hoarse and their voices were shot,

But I would holler "Bucephalus!", hop up on my horsey, and trot off!

Leave 'em in an unfortunate spot! 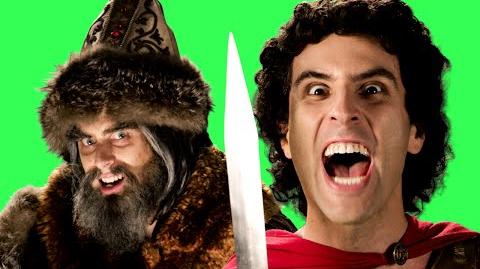 Alexander the Great vs. Ivan the Terrible - ERB Behind the Scenes 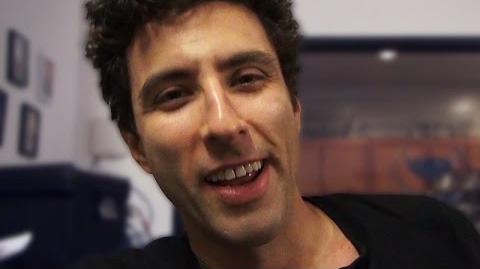