Alfred Joseph Hitchcock was born on August 13th, 1899, in Essex, United Kingdom. He was an English film director and producer, acclaimed in Britain for movies such as The Thirty-Nine Steps. Moving to Hollywood in 1939, Hitchcock went on to host an anthology television show called Alfred Hitchcock Presents which features his now-famous silhouette entrance. Among his later works, notable for their suspense and their technical ingenuity, are the thrillers Strangers on a Train, Psycho, and The Birds.

For his work, Hitchcock has received two Golden Globes, eight Laurel Awards, the first BAFTA award and five lifetime achievement awards. In addition, Hitchcock was knighted by Queen Elizabeth II to Sir Alfred Joseph Hitchcock, KBE in 1980. He is nicknamed "The Master of Suspense" and is often regarded as one of the greatest directors of all time by movie critics, very commonly listed as the greatest director ever. He died on April 29th, 1980, in Bel Air, California.

That was a close encounter of the turd kind,

But there won't be a pretty ending this time.

Half your billions should go to John Williams!

Now brace yourself as I reveal my brilliance!

I'm the master…of suspense, so intense,

No defense against Hitchcock once he presents! (Ahh!)

You're more horrible than Megan Fox's acting in Transformers!

C'mon! Fish puppets and Muppets to stir the fears up!

I squeeze screams out of chocolate syrup!

I'm the best mamma-jamma ever stood behind the camera!

Damage panderers and haunt you like the last Indiana!

Well that was a close encounter

of the turd kind

But there won't be a happy little ending this time

Against Hitchcock once he presents

You wouldn't be anything without me

I'm the one who invented all your best techniques!

fish puppets and Muppets to stir the fear up

I can squeeze screams from some chocolate syrup

You're as boring to watch as dialogue in Transformers

you may be worth billions,

But half that cash should go straight to John Williams

And not to put your pictures into black and white

Got paid for Amistad, right? Yikes.

ever stood behind a cameras

Hitchcock's scrapped lyrics as seen in the Behind the Scenes 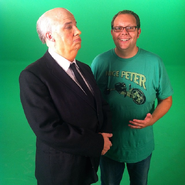 Mike Betette with Hitchcock posted on Betette's Instagram account
Add a photo to this gallery
Retrieved from "https://epicrapbattlesofhistory.fandom.com/wiki/Alfred_Hitchcock?oldid=1485609"
Community content is available under CC-BY-SA unless otherwise noted.