An American black bear made a cameo appearance in Lewis and Clark vs Bill and Ted. It was portrayed by Mike Betette.

The American black bear, or the Ursus americanus, is a species which is native to North America and Canada. They typically live in California, Oregon, Washington, Montana, Colorado, and other places with forests, including those on Lewis & Clark's journey. They are omnivores, and eat anything from berries to small mammals.

The bear could be seen at the Mississippi River, being tackled and later killed by Sacagawea in the background during Lewis and Clark's second verse.

The American black bear in the Behind the Scenes 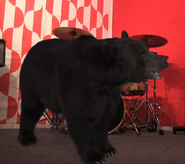 The ERB announcer in the form of an American black bear 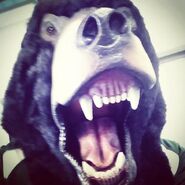