André the Giant made a cameo appearance in an unreleased ERB News. He was portrayed by EpicLLOYD.

André René Roussimoff, better known by his ring name, André the Giant, was born on May 19, 1946. He was a professional wrestler and actor from Grenoble, France. Roussimoff suffered from acromegaly, or "giantism". One of five siblings, Roussimoff left his family's small farm at age fourteen. After training with the French wrestling champion Frank Valois, he wrestled in Montreal under the name Jean Ferre and in Japan as "Monster Roussimoff". He became known for his baby face and intimidating physique, and soon proved virtually unbeatable in Canada's wrestling circuits. Valois, acting as his manager, set up a meeting with the wrestling promoter Vince McMahon, Sr.

In 1973, Roussimoff debuted at Madison Square Garden as "André the Giant". During the 1970s, he wrestled more than 300 days a year and became one of the world's most famous professional athletes. Though he never lifted weights, he was thought by some to be the strongest man in the world. He remained dominant into the late 1980s, defeating Hulk Hogan for the World Wrestling Federation Heavyweight Title on February 5, 1988. At his largest, Roussimoff was probably six feet eleven inches tall, though he was advertised as seven feet four inches. He weighed close to five hundred pounds and was famous for his immense capacity for alcohol and food. His phenomenal stature led to a movie role as Fezzik, the gentle giant in Rob Reiner's 1987 film, The Princess Bride.

Unfortunately, as he grew older Roussimoff's size caused him frequent health problems. In 1986, he had surgery to relieve pressure on his spine and was thereafter forced to wear a back brace when he wrestled. By 1992, he had undergone extensive knee surgery and became increasingly overweight and immobile. He continued to wrestle, however, appearing for the last time in Japan in December of 1992. On January 27, 1993, Roussimoff died of an apparent heart attack in his hotel room in Paris while visiting his father's own funeral.

Appearance in the news video

In the news video, he appears after the real Hulk Hogan says, "This is gonna be giant, brothers!" when talking about the new Epic Rap Battles of History Website. He comes in asking, "Did somebody say giant, boss?"

André the Giant in the ERB News video 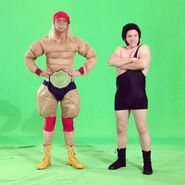 André the Giant with Hulk Hogan in a picture EpicLLOYD uploaded on Facebook
Community content is available under CC-BY-SA unless otherwise noted.
Advertisement