Walt Disney's animators made a group cameo appearance in Jim Henson vs Stan Lee. They were all portrayed by Mary Doodles.

The animators could be seen drawing various logos and characters during Walt Disney's final line, "Now, look at it! Gaze upon my empire of joy!" The distinguishable ones were: 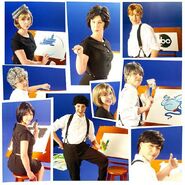 A behind the scenes look at Walt Disney's animators
Add a photo to this gallery
Retrieved from "https://epicrapbattlesofhistory.fandom.com/wiki/Animators?oldid=1420879"
Community content is available under CC-BY-SA unless otherwise noted.