Ash Ketchum (Japanese: サトシ Satoshi) is the main character of the Pokémon anime series, as well as a number of manga and comics based on the anime. He is loosely based on Red from the first generation of Pokémon games. His Japanese name is derived from the series' creator, Satoshi Tajiri; his English name is taken from this as well, while his surname is based on the franchise's original motto, "Gotta catch 'em all!" In Japanese, the character is voiced by Rika Matsumoto, while in the English dub, he was voiced by Veronica Taylor for the first eight seasons and is now currently voiced by Sarah Natochenny.

Born in Pallet Town in the Kanto region, Ash lived with his mother, Delia, until he was ten years old—the age of becoming a Pokémon Trainer. However, because he woke up late, his rival, Gary Oak, was ahead of him as Ash was left with nothing but a Pikachu from Professor Oak. Though Ash and Pikachu began at a rough start, their relationship grew overtime, and they soon became best friends. With Pikachu forever at his side, Ash has traveled across many different regions, including Kanto, the Orange Islands, Johto, Hoenn, Sinnoh, Unova, the Decolore Islands, Kalos, Alola, and Galar; currently, he travels across all known regions. Along his journey, he has caught numerous Pokémon of every type and challenged Gyms for Gym Badges in hopes of being a Pokémon Master. Ash has also befriended and traveled with many people, including Misty, Brock, Tracey, May, Max, Dawn, Iris, Cilan, Serena, Clemont, Bonnie, Kiawe, Mallow, Lana, Sophocles, Lillie, and Goh. His adventures frequently see him facing off against Jessie, James, and Meowth of Team Rocket - a criminal organization that steals and abuses Pokemon. This trio usually attempts to steal Ash's Pikachu, due to its extraordinarily powerful strength.

[Note: Ash Ketchum is in blue, and Charizard and Pikachu are in regular text.]

Darwin wants to battle? Doesn't seem like a fight,

But this should be fun! I've yet to catch the Ghost type!

Open my pockets and go (Charizard!) on your ass!

I don't care how many beetles and butterflies you squoosh!

Your shit-talking mouth is the origin of feces!

You got candy raps: Reese's Pieces!

In this ecosystem, I'm the dominant species!

When it's time to train, I turn to Pikachu, (Pika!)

But when I need a weak verse, I choose you!

You think I'm impressed by your boat trip? Please!

You're the most annoying thing on a Beagle since fleas!

You're a glitchy old man best left out at sea!

Set sail and Galápago-suck on these!

Man, if that's true, then nature is cruel

'Cause the only thing you're winning is your cousin's gene pool!

You lost three children while they were still small!

To the very best! Isn't that right, Pikachu?

When I need to train, I turn to Pikachu.

I'm a Fire-type rapper; got a Pallet in my pack

With a natural-list of elements to kick your grass!

This aint no glitch; I'll be missing no hits!

You got theories getting split by critics in 8 bits!

So he gave his first cousin his trainer tip!

And it's not very effective when you travel the globe

Which Pokémon are you? My dex don't know,

But the rap on this track's one-hit K.O.!

Darwin wants to battle? Doesn't seem like a fair fight,

But this should be fun! I'm yet to catch a Ghost type!

I spit ice-cold rhymes, and your ass is grass!

Your attract is so ineffective you gave your cousin your trainer tip!

All your burns have been squelched by my flow!

Spittin' ice-cold rhymes, and your ass is just grass!

But right now I need a weak verse; I choose you!

You act like your novels have ever been Red!

Like Team Rocket, I'll have to put you on blast again

'Cause you said it: the measurement of worth is a friendship,

And my Pokédex has more entries than your friends list!

I'm a trainer, a battler, a capturer, a master!

The physical appearance of our fitness doesn't matter!

It's the bonds we share that build the strength we can bear,

And you have about as much as your head has hair!

So I don't need to evolve; my team is strong the way we are!

Every single diss you throw at me, I'm gonna catch 'em all!

Pika, use a sick bar as your finishing move!

Electric's super effective! You know we won't be losing

To a dude who watched a monkey poop and called it evolution!

Your heart fainted! You can't revive it to attack us!

You could use a gym; this 'aint survival of the fattest!

You forgot something in the mortal words of your journal:

The world of my journey and dreams is eternal!

My six balls are a lady's dream team!

Yo, ummm, just in case you didn't know,

You're bugging; it's the old man glitch disease!

So set sail and Galápago-suck on these! 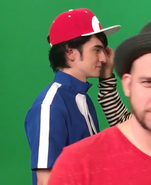 Another preview of Ketchum, along with his Pikachu and Team Rocket

Ketchum's eyes as they briefly appear in an anime style 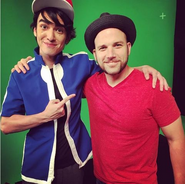 A picture of Ketchum, who had a Master Ball in his hand, and Nice Peter 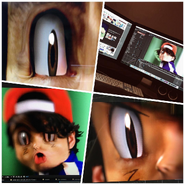