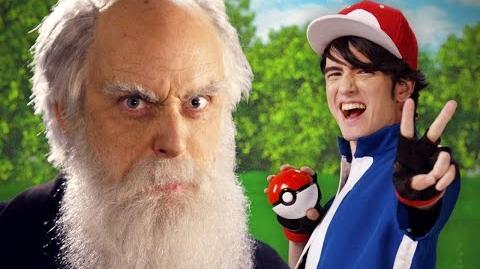 Ash Ketchum vs Charles Darwin is the sixty-sixth installment of Epic Rap Battles of History and the eighth episode of Season 5. It features the main protagonist of the Pokémon anime and aspiring Pokémon Master, Ash Ketchum, and the discoverer of natural selection and other mechanisms of biological evolution, Charles Darwin. It was released on November 14th, 2016.

Dante Cimadamore as James and The March of Progress (cameo)

[Note: Ash Ketchum is in blue, Charles Darwin is in dark gray, Charizard is in orange, and Pikachu is in yellow.]

Darwin wants to battle? Doesn't seem like a fight,

But this should be fun! I've yet to catch the Ghost type!

Open my pockets and go (Charizard!) on your ass!

I don't care how many beetles and butterflies you squoosh!

Your shit-talking mouth is the origin of feces!

You got candy raps: Reese's Pieces!

In this ecosystem, I'm the dominant species!

When it's time to train, I turn to Pikachu, (Pika!)

But when I need a weak verse, I choose you!

Hello there. Welcome to a world called Earth,

Where actual minds do groundbreaking work!

If you're looking for the fittest, I'm the natural selection!

You're so ineffective you couldn't even turn 11!

What you spit's just not hard-hitting enough!

You got no Game, Boy, so you'll get the broom quick!

The real Ash packs a much bigger BOOMSTICK!

What I've glimpsed will outclass all the crap on your laughable list!

My research reversed the first words of the Church!

You measure your worth by the sales of your merch!

You think I'm impressed by your boat trip? Please!

You're the most annoying thing on a Beagle since fleas!

You're a glitchy old man best left out at sea!

Set sail and Galápago-suck on these!

When I battle a foe from so simple a beginning,

I'm not Charles Sheen, but I am Dar-winning!

Man, if that's true, then nature is cruel

'Cause the only thing you're winning is your cousin's gene pool!

You lost three children while they were still small!

It took millions of years for mankind to evolve!

Now they're hunched over cell phones playing with your balls!

And it was hard losing my daughters and their brother,

As hard as the wood that Oak gave your mother!

Hello there! Welcome to the world of reality,

Where animals are merely benefactors to humanity,

Not family! This is the cycle that we are born from,

And I'm the next professor you're taking orders from!

I'll make the face of a franchise faint!

Beat you 'til you're Red and Blue 'cause you got no game!

No strength, no smarts, not responsive to change

'Cause it took you over 20 years…not to age!

Over centuries, mankind has grown to be upright!

Today, they need to Pokémon GO get a life!

Hunched over touching balls with a phone in their hand,

So I hypothesize this fight is the Descent of a PokéMan!

If the power is inside, cough it up!

You can trade all you want; you're still the master of none,

And it doesn't matter how many badges you earn!

I keep spitting those burns to put Ash in an urn!

Not family! This is natural order and no lesser!

Now prepare to be uprooted by an actual professor!

Generations of evolution has made me the most fit

To shit on unscientific metamorphosis!

The process you misdefine is how we adapt,

And based on your league record, that's something you can't grasp!

To the very best! Isn't that right, Pikachu?

I'm a Fire-type rapper; got a Pallet in my pack

With a natural-list of elements to kick your grass!

This aint no glitch; I'll be missing no hits!

You got theories getting split by critics in 8 bits!

So he gave his first cousin his trainer tip!

And it's not very effective when you travel the globe

Which Pokémon are you? My dex don't know,

But the rap on this track's one-hit K.O.!

Darwin wants to battle? Doesn't seem like a fair fight,

But this should be fun! I'm yet to catch a Ghost type!

I spit ice-cold rhymes, and your ass is grass!

Your attract is so ineffective you gave your cousin your trainer tip!

All your burns have been squelched by my flow!

Spittin' ice-cold rhymes, and your ass is just grass!

But right now I need a weak verse; I choose you!

You can't catch 'em all when you don't have the balls!

So when you and your little rat try to give me a shock,

Just remember, you've lost to every champion you fought!

On the Origin of Species, we grow as a population,

Revising, but not restarting, as we move through generations.

These survival traits are nature's fate to pick and choose,

And I see an endangered species when I Pikachu!

If to Ketchum was your real test, then you scored an F!

What you call evolution is short of metamorphosis!

Now, the force of biology is how we reproduce!

It's called natural selection, and it won't choose you!

What you call evolution is mere shapeshifting!

Against a kid not smart enough to evolve a Pikachu!

This battle's natural selection, and it won't choose you!

You act like your novels have ever been Red!

Like Team Rocket, I'll have to put you on blast again

'Cause you said it: the measurement of worth is a friendship,

And my Pokédex has more entries than your friends list!

I'm a trainer, a battler, a capturer, a master!

The physical appearance of our fitness doesn't matter!

It's the bonds we share that build the strength we can bear,

And you have about as much as your head has hair!

So I don't need to evolve; my team is strong the way we are!

Every single diss you throw at me, I'm gonna catch 'em all!

Pika, use a sick bar as your finishing move!

Missed! I didn't even flinch!

Tell me how imaginary creatures are stronger than my finch!

Electric's super effective! You know we won't be losing

To a dude who watched a monkey poop and called it evolution!

You claim to conquer monsters, but your heart is so delicate!

Your mom asked me to revoke your gym membership!

Your heart fainted! You can't revive it to attack us!

You could use a gym; this 'aint survival of the fattest!

What's a life of learning to a boy who's never grown?

Like the first movie, you're forever froze in an Everstone!

You forgot something in the mortal words of your journal!

The world of my journey and dreams is eternal!

I've been catching critters before you were a Squirtle in your daddy's Poké Balls!

I'm sailing the championship that you never won,

You got no Game, Boy, so you better choose quick!

I'd say you're an even worse trainer than Michael Vick!

When I need to train, I turn to Pikachu.

Hello, and welcome to a world called Earth.

My six balls are a lady's dream team!

Yo, ummm, just in case you didn't know,

You're bugging; it's the old man glitch disease!

So set sail and Galápago-suck on these!

When I flow against a foe from so simple a beginning, 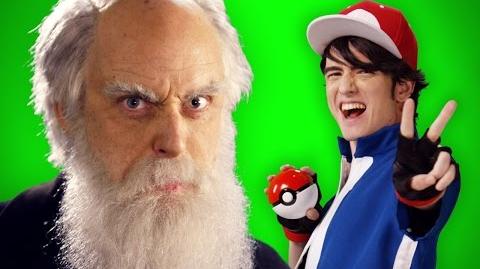 Ash Ketchum vs Charles Darwin - ERB Behind the Scenes 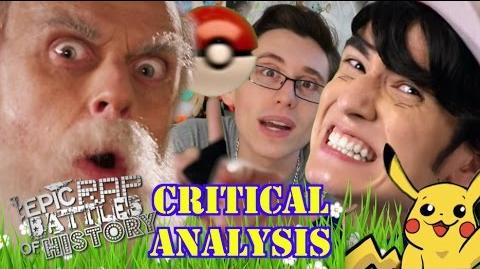