Atoki Ileka is a production assistant for Epic Rap Battles of History since Deadpool vs Boba Fett.

Atoki Ileka was born on June 26th, 1988, in Athens, Greece. He is an American actor, filmmaker, producer, writer, and member of the Epic Rap Battles of History crew. He is most notable for his work on a variety of short films, such as "Purgatory Comics", "Ghouls Gone Wild", and "Perfect Purple". He has also written, produced, and starred in his own short film, "Southern Hospitality", which has gathered attention from various film festivals. 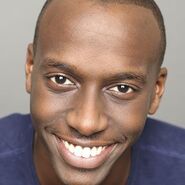 Ileka's Facebook avatar
Add a photo to this gallery
Retrieved from "https://epicrapbattlesofhistory.fandom.com/wiki/Atoki_Ileka?oldid=1402589"
Community content is available under CC-BY-SA unless otherwise noted.