Sir Augustine Danger "Austin" Powers, KBE, is a fictional character from the Austin Powers film trilogy, and is created and portrayed by comedian Mike Myers. He is the protagonist of Austin Powers: International Man of Mystery (1997), The Spy Who Shagged Me (1999), and Austin Powers in Goldmember (2002). He is a womanizing, hard-partying British spy embodying the Swinging London mod culture and hippie culture of the 1960s who, with his nemesis Dr. Evil, was frozen in a cryogenics experiment until being eventually awakened in 1997. The series' humor follows his attempts to adjust to the modern world as he continues to try to save it from terrorism. In the final film in the trilogy, he is revealed to be Dr. Evil's twin brother.

[Note: Austin Powers is in dark blue, while James Bond (Sean Connery) is in regular text.]

You look a lot more blond in your movie, baby.

(Yeah!) Basil Exposition told me this would be boring,

But Jesus, man, even my mojo's snoring!

I mean, you can't shag properly with that waxed tush!

Birds flock to the musk of my chest bush!

(Yeah!) I'll hypnotize you with a little striptease,

And then judo chop; I'm swinging on you like the sixties!

(Yeah!) You're defenseless; my rhymes can't be deflected!

You're like all the sex I've ever had: unprotected!

(Yeah!) People want a hero with a little personality!

No one wants to sit through your gritty reality!

You made Thunderball two bloody times!

I'm one of a kind; you're always getting remade!

Rap these you velvety hack! Jeez!

Yeah, to be honest, you are a bit rapey.

There's no competition in a battle of best looks.

You're too clean; you look like you bleach and wax your tush!

I love your outfit baby, that'd go nice with my bed

Especially that shag rug you've got on your head

Is that all, have you had it?

I think Q should have made you a rapping gadget

I'm not impressed by your suit or those groovy shoes

You look like you escaped an episode of Scooby-Doo 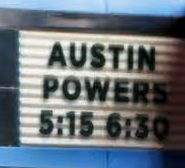 A movie theater sign for Austin Powers in Harry Potter vs Luke Skywalker.