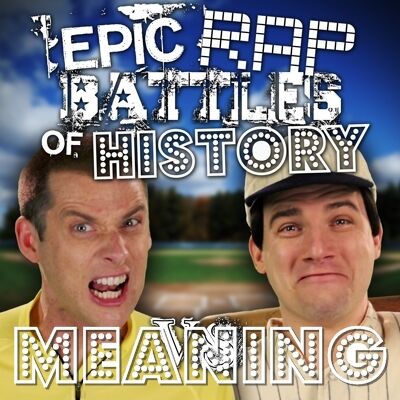 (When Lance admitted he took performance-enhancing drugs, he said, "My ruthless desire to win at all costs served me well on the bike, but the level it went to, for whatever reason, is a flaw. That desire, that attitude, that arrogance." It's also a play on words: "ruthless" as in Ruth, Babe's last name. Lance says he's preparing to go all out on Babe Ruth.)

(Armstrong admits that he doped in order to win his races because winning was everything to him.)

(Armstrong was an athlete, first and foremost. Ruth, on the other hand, developed a dubious reputation off the field despite his accomplishments on the field that Armstrong will explain in the next line.)

(Ruth was a drinker, a smoker, and an over-eater, which made him gain weight in his later career.)

(Armstrong was very fond of Frenchmen, having been in many Tour de France races. The stereotype for French people is that they normally act rude with other people, usually foreigners. Lance says they still behave better than Ruth, who drank a lot of booze and ate a lot of food.)

So swing, batter batter! Show me what a fatter rapper can do!

("Swing, batter batter" is a common baseball taunt to make the batter lose his focus and swing at the wrong time. Armstrong mocks Ruth's weight again, saying he's just a fat rapper with no talent. He's also calling himself slim by saying Ruth is fatter than he is.)

(Lance Armstrong beat testicular cancer in 1997. He's saying if he can beat cancer, then beating Ruth won't be hard at all.)

(Ruth's being sarcastic about Armstrong's victory against cancer. This is also a reference to the "Livestrong Foundation", the nonprofit founded by Armstrong to support people who have cancer.)

Now I'll drop your ass faster than your own foundation!

Third base with an Olsen twin; that's the sin, face it!

(Ruth retorts to Armstrong's previous line about his sins, citing Armstrong's brief fling with Ashley Olsen, one half of the Olsen Twins. Since she's 15 years younger than Armstrong is, Ruth believes it's a sin for Armstrong to be dating someone that young. Another baseball pun: third base is a position in baseball, and to get to third base with a woman is to have oral sex with her.)

She's just a little girl! What'd you give her, a bracelet?

(Ruth is referring to how Olsen was still in her early 20's when she and Armstrong dated; he was around 40 at the time. Ruth further implies that Armstrong must have given her a "Livestrong" bracelet in order for her to date him.)

The whole nation knows you ride too tight in the crotch!

(Ruth is making a joke about how cyclists have to wear tight shorts when they ride, and since Armstrong only has one testicle, it makes his crotch area even tighter. Steroids also cause testicles to shrink, showing that they're even smaller.)

You're as boring as your Tour de France is to watch,

(Even though the Tour de France is a televised event, it doesn't get much attention as a sport. Compared to baseball, watching people in a bicycle race can get pretty boring, so Ruth says Lance is as uninteresting as the sport he plays. Tour de is also a pun on turdy.)

So come on, little buddy! Don't look so pissed!

(Ruth tells Lance to stop being so angry after dissing him.)

With all that blood and attitude, you're like a menstrual cyclist!

(One of the substances Armstrong took was a blood enhancer called EPO, normally used to promote healing and reduce fatigue in patients with chronic illnesses such as cancer. Ruth also makes a pun on menstrual cycle, the sequence of events in which women have their periods. When some women have their periods, they can become overly emotional. Ruth sees Armstrong as moody, so he calls Armstrong a girl on her period because of his attitude, mixing in cyclist with menstrual cycle.)

(Ruth's records were set before Jackie Robinson broke baseball's color barrier in 1947. Since that time, black men have progressed to dominate many sports. Since he expects that African-Americans would participate in sports like baseball, Armstrong thinks that Ruth’s accomplishments mean little because there was no one with whom he could be compared in his time. Ruth’s records would remain virtually unchallenged by an athlete of color until Henry "Hammerin' Hank" Aaron, a black player who entered Major League Baseball after segregation was abolished, shattered Ruth's career home-run record legitimately in 1974, with his 755 home runs surpassing Ruth's 714.)

(Given what we know from the prior verse, this line is saying that having no black people in a sport is like participating in a pasta contest without Italy, the country best known for their pasta cuisine: it just doesn't work.)

(Ruth was sent to an orphanage at age 7 and spent his childhood there, playing baseball with other kids. He had become a professional player of the sport quickly and rose to fame.)

(It has been said that Babe Ruth never trained to improve his game as present players do on a consistent basis and that he had natural talent, so Armstrong says if he actually trained, he could have been a lot better, and he wouldn't have had a lot of health problems either.)

(Armstrong is calling himself strong and in shape, being one of the most fit athletes at the time of his glory.)

(Ruth often had sex with prostitutes; Armstrong is calling his excuse "foul tipping" ridiculous. A foul tip is the baseball term for when the batter hits the ball and it lands in the catcher's mitt. Also, "stick" can perhaps be seen as a pun, referring to both Ruth's penis and a baseball bat.)

(Armstrong says that Ruth will wind up dead while trying to rap against him. He also may be referring to Ruth withering away to skin and bones after his condition became worse in later years. In a Tour de France race, the lead rider earns the right to wear a yellow jersey; before his titles were taken away, Armstrong was the lead rider in his seven wins, and he was normally seen wearing the yellow jersey.)

(His last line is saying how he will always win. A peloton is any formation of cyclists, most often leading in a race, who play off of each other's momentum in order to gain advantage as individuals.)

It's the bottom of the ninth against the Texan in a bathing suit,

(In baseball, the bottom of the ninth inning is when the home team gets the final at-bats of the game provided the team isn't leading the game, just as Ruth is getting the last swing here. It's towards the end of the battle against Armstrong, who is from Texas, and his racing gear can resemble a one-piece bathing suit.)

Filled with more artificial ingredients than a Baby Ruth.

(A Baby Ruth is a candy bar with a similar name to his (contrary to popular belief, the candy bars were not named after Babe Ruth, but was rather named after Ruth Cleveland, President Grover Cleveland's popular first-born daughter). Because Armstrong took steroids, it could be said he was filled with artificial ingredients like the chocolate bar.)

It may be way too soon, but I'm calling my shot,

(Referencing Babe Ruth's disputed "called shot" where he supposedly called his next play by pointing toward centerfield. In Game 3 of the 1932 World Series, Ruth was down 0-1 when he gestured to indicate he was still up to bat with strikes to give. Ruth then took his second strike and gestured once more, crushing the next pitch for a home run. He's saying he'll take a shot at his last verse.)

And I'm not talking about those Italian syringes you brought!

(Syringes are for injecting drugs. When he says "take a shot", he's doesn't mean Armstrong's syringes for his steroids.)

The Sultan of Swat will knock you right out of the park,

(Ruth was also known as the Sultan of Swat for hitting so many home runs that were knocked out of the baseball field. He'll hit Lance so hard, he'll knock him out of the park.)

And round the bases to the sound of uproaring applause,

(Continuing from the previous line. a home run is scored when the batter is able to run around all 4 bases at one time without being stopped by the defending team. This is done under uproaring applause from the fans.)

While you hang your head in shame and disgrace because

(Armstrong will be ashamed that he lost, and he will hang his head, disgraced.)

You got lost and forgot what real sportsmanship was!

(Real sportsmanship is when athletes truly win without cheating. Armstrong lost his way, caring only about winning.)

You look tired, kid. You got Sheryl Crow's feet eyes.

(Pun on Armstrong's previous girlfriend, singer Sheryl Crow, and crow's feet eyes, which means wrinkles on the outer corner of one's eyes, usually due to aging. Ruth is saying that Armstrong looks tired after the battle is almost over, combining crow's feet with Sheryl Crow. Ruth reportedly could not retain the names of people he met, so he would call them "kid" instead.)

Pedal home to France and maybe bring me back some fries,

(While he does not live in France, Armstrong made his name there as that is the country where cycling is most popular around the world. And, of course, Ruth loved eating french fries, a food which, while invented in Belgium and not France, gained significant popularity there.)

'Cause if you step to Ruth on the mic, I'll fan your fancy bike and all.

(If anyone steps up to Ruth for a rap battle, specifically Armstrong, he will destroy him, as well as his bicycle. "Fanning" is also a baseball term, which means that the pitcher strikes out the batter, and Babe Ruth was known to be an ace pitcher.)

Yerrr out, with three strikes, and just one ball!

(In the game of baseball, a "strike" is recorded when the batsman intentionally swings at an oncoming pitch, or when a pitch crosses home plate between the batsman's chest and his knees, or when the batsman strikes the ball so as to make it "foul", crossing outside the field of play. A "ball" is recorded when the pitch goes outside the batter's box and does not count against the batter; if the batter records four balls before missing three strikes, he "walks" and takes first base. The "Yerrr out" line is a phrase said by the umpire when a player misses three strikes. The line again points out the fact that Armstrong only has a single testicle due to his operation to beat testicular cancer, so he only has one ball.)

[Note: These were simply pitched ideas for lyrics that did not develop into full lyrics.]

Retrieved from "https://epicrapbattlesofhistory.fandom.com/wiki/Babe_Ruth_vs_Lance_Armstrong/Rap_Meanings?oldid=1472303"
Community content is available under CC-BY-SA unless otherwise noted.