Bald eagles have made cameo appearances in multiple Epic Rap Battles of History episodes. They first appeared in Barack Obama vs Mitt Romney, in which the talons of the eagle were bodyacted by Dante Cimadamore. Another one appeared in the form of an image in Steven Spielberg vs Alfred Hitchcock, and a third one came from a puppet controlled by Nice Peter in Lewis and Clark vs Bill and Ted. It is likely that Dante reprised his role as the eagle's talons for Donald Trump vs Hillary Clinton, in which it was seen in the Behind the Scenes that EpicLLOYD voices the eagle.

The bald eagle, or the Haliaeetus leucocephalus, is a species which is native to North America. They typically live near bodies of water in Canada and Alaska, as well as in scattered locations all throughout the lower 48 states and Mexico. The bald eagle is both the national bird and national animal of the United States of America, appearing on the country's seal.

The eagle flew Abe Lincoln into the battle and scooped him back up after it ended. The eagle also shouts "CAW!" after Mitt Romney and Barack Obama growl at each other, as well as shouting it at the end of Lincoln's verse. The eagle says it one last time when the announcer yells, "Epic—", which is followed by, "CAW!", and finishes with, "Rap Battles of History!"

The eagle appeared flying through the sky in Michael Bay's verse during the line, "Got a gift from above and the eyes of an eagle!" The eagle then blows up, but later reappears in the outro when an explosion occurs after the announcer shouts, "Epic Rap Battles of History!"

A puppet version of the eagle appeared at the Mississippi River in Lewis and Clark's second verse during the line, "We put the dis in dysentery 'cause we spit sick…" The eagle shouts, "CAW!" as they rap their next line.

Similar to Barack Obama vs Mitt Romney, the eagle once again flew Abe Lincoln into the battle and scooped him back up at the end of his verse. The eagle also shouts "CAW!" like it did in the previous election battle, saying it first after Donald Trump's line, "For the last eight years, this country's been run by—", as a way to censor it. The eagle then said it after Lincoln said the lines, "I've half a mind to feed you both to my oversized—" and "That's of the people, by the people, for the people! EAGLE!!!" 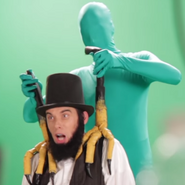