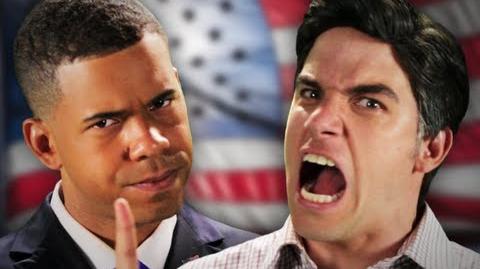 Barack Obama vs Mitt Romney is the twenty-third installment of Epic Rap Battles of History and the eighth episode of Season 2. It features 44th President of the United States, Barack Obama, rapping against 2012 Republican presidential candidate, Mitt Romney, along with a surprise entry from the 16th President of the United States and previous ERB participant, Abe Lincoln. It was released on October 15th, 2012.

This battle is the first of several that have focused on the United States presidential elections since ERB's creation. It was followed by Donald Trump vs Hillary Clinton in 2016 and Donald Trump vs Joe Biden in 2020, respectively.

I'm not gonna let this battle be dictated by facts!

We all know what went down in that 2008 election!

You're a decent politician with a winning complexion!

You're all Barack and no bite! Been no change, and we're all still hoping

That you'll shut your mouth, but like Guantanamo Bay, they're both open!

You're from the Windy City, where you're looking pretty with your blowhards,

But come January, you'll be left evicted and with no job!

Raw rhymes, stronger than my jawline when I spit a phrase,

Knocking you harder than front doors in my old mission days!

You see this silver spoon? This dug Mass outta debt!

Took you four years to drop unemployment down below 8 percent!

You feel that, Barry? You're old news! Everyone's having doubts,

And your rhymes are as weak as this economy that you've done nothing about!

Call me a vicious business man 'cause Romney's stealing this race!

They say your father was a great man. You must be what's left.

Need to stop hating on gays; let 'em teach you how to dress!

You've got the momma jeans and a Mr. Fantastic face!

So rich and white, it's like I'm running against a cheesecake!

Republicans need a puppet, and you fit!

Got their hands so far up your rear, call you Mitt!

I'm the Head of State! You're like a head of cabbage!

'Bout to get smacked by my stimulus package! (Hahaha!)

You're a bad man with no chance; you can't even touch me!

I got four more years (two terms!) in the White House; just trust me!

I hope you saved your best rhymes for the second half

'Cause right now, I'm 47 percent through kicking your ass!

Whatever! That 40 percent thing got you real mad!

What, did it remind you how many decent parents you had?!

(Uhh…) Look, I respect all religions (uhh…), but it might get crazy

If the White House has a First, Second, and a Third Lady!

You got hitched to the female version of Patrick Ewing!

We'll see how pretty your face is after my fist has kissed it!

(Ahhuuhhaa…) You're a stuttering communist!

By the power invested in me by this giant bald bird,

The President shall not be the shiniest of two turds!

You! I wanna like you! Don't talk about change; just do it!

I fought for what was on my brain until a bullet went through it!

And you, moneybags, you're a pancake: you're flip-floppity!

It's a country, not a company you can play like Monopoly!

I'll properly reach across the aisle and bitch-smack you as equals!

You haven't even brought the unemployment rate below 8 percent!

(Ahhhuuhaa…) Today, Jay-Z, what are you saying?! 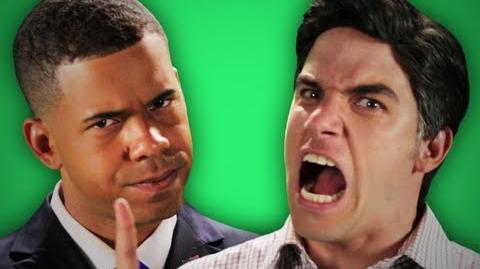 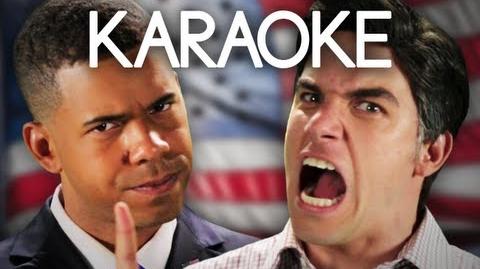 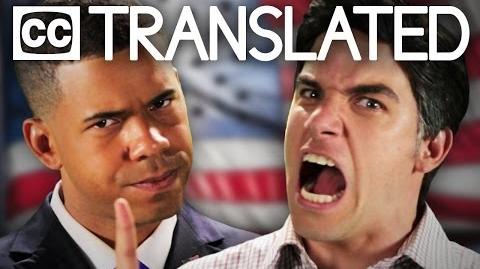 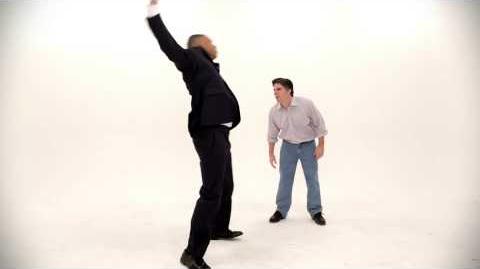