In basketball, the basketball court is the area on which said game is played, consisting of a rectangular, symmetrical floor with one basket at either end of the court. Basketball courts have three-point arcs at both baskets. A shot in the basket made from behind this arc is worth three points, and a shot made from inside this arc is worth two points. In the NBA, the court is 94 by 50 feet (28.65 by 15.24 meters). The baskets are always 10 feet (3.05 meters) above the ground. The sizes of the courts, the distance of the three point line, and the heights of the rim differ for youth and high school. Some basketball courts exist with only one basket and one half of the court. These types of courts are often found outside.

This is the location where Michael Jordan rapped. While Jordan was rapping, the skyline of Chicago could be seen (a reference to the fact that Jordan played for the Chicago Bulls from 1984–1993 and again from 1995–1998), with traffic bustling about. 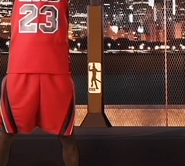 Retrieved from "https://epicrapbattlesofhistory.fandom.com/wiki/Basketball_Court?oldid=1419115"
Community content is available under CC-BY-SA unless otherwise noted.