William Sanford "Bill" Nye was born on November 27th, 1955, in Washington, D.C. He is a science educator, comedian, television host, actor, writer, and scientist, who began his career as a mechanical engineer at Boeing. He is best known as the host of the Disney/PBS children's science show Bill Nye the Science Guy. He has also appeared in popular media, such as Dancing with the Stars, a dance show he was eliminated from very early in the competition.

In early 2014, Nye was a part of an evolutionary debate against young Earth creationist, Ken Ham. Nye won in the votes by a large margin.

[Note: Bill Nye is in light blue, while Carl Sagan is in regular text.]

Yes, it's true. What I used to do is teach kids science on my PBS show,

But now I do what I gotta do to make sure scientific thought can grow!

And I'm still in my prime, hitting my stride. What'd you do with the back half of your life?

You freaked out, started counting coins for the bank, and you sure didn't have no wife! (Ooh!)

You wrote the book on gravity, but you couldn't attract no body!

Your work on orbits was exemplary, but your circle of friends was shoddy! (Oh!)

You don't wanna mess with the guy, Bill Nye! (Why?)

I rap sharp like a needle in your eye! (Oh!)

Stick to drinking that mercury,

'Cause I hypothesize that you're about to get beat!

It's true, all I used to do is teach kids science on my PBS show. 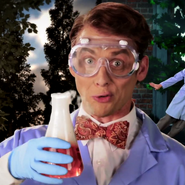 Bill Nye wearing his goggles and holding a beaker

Bill Nye on an AMA questioned about the battle

Bill Nye when asked about the battle on AMA again

Bill Nye once again acknowledging the battle on Facebook

Nye, Tyson, Peter, and Lloyd at the 2017 Creative Arts Emmy Awards
Add a photo to this gallery

Retrieved from "https://epicrapbattlesofhistory.fandom.com/wiki/Bill_Nye?oldid=1474588"
Community content is available under CC-BY-SA unless otherwise noted.