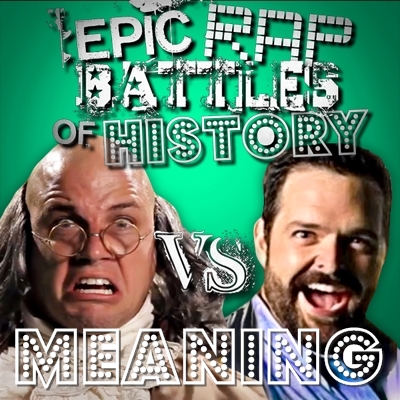 I'm Big Ben Franklin, and this shan't be pretty!

(Benjamin Franklin was notorious for being a large man, which in his time, was considered a sign of wealth to show how well-fed you were. Big Ben is a clock in England, so he plays on the fact that he was big, like Big Ben. "Shan't" is an archaic contraction of "shall not", so Franklin is telling Billy Mays that this won't end well for him.)

("Philly" is the nickname of Philadelphia, Pennsylvania, where Franklin lived for most of his life. It can sometimes be seen as a tough town, so he says that being from Philadelphia makes him stronger than Mays.)

(Rick James was a singer and songwriter who often did cocaine. Franklin is telling Mays that he's so bad at selling products, he couldn't even sell crack to a drug addict. This also could be a reference to autopsy reports finding cocaine in Mays' body after his death.)

My victory is more certain than death or taxes!

(One of Franklin's famous sayings was, "The only things certain in life are death and taxes." Death will always eventually happen because it's a part of life. Taxes, as a joke, will happen as well, due to governments collecting money to buy necessities. Because of this, Franklin is stating he'll definitely win this battle and assures it more than he's assured of death or taxes, two of life's biggest certainties.)

Fact is, you're a hack; whack QVC joke!

(Quality, Value, Convenience, or QVC, is a televised home shopping TV channel, where many of Mays' commercials have aired. He is also telling Mays that his character is so fake and animated for a real person that he is a laughingstock.)

(One of the products Mays was famous for selling was the surface cleaner Kaboom!, which could also remove stains from windows. Franklin is saying that he only advertises cleaning products and never anything that is actually significant.)

(Franklin states he will finish Billy Mays off and says that he will create a coffin for Mays, putting the nails in using his raps. It could also foreshadow the fact that Mays dies later on in the battle.)

(Arthur Miller was an American playwright who wrote Death of a Salesman. Ben Franklin wishes to be addressed as him, in the sense that he is going to kill Mays, who is also a salesman. Once again, he could be foreshadowing Mays' death later in the battle.)

(Many of Mays' commercials started with them introducing himself, followed up by him saying that he has a special TV offer.)

(Mays is calling Franklin bald and fat, along with foppish, which means dressed up or dandified. Franklin was one of the "Founding Fathers" of the United States, along with John Adams, Alexander Hamilton, John Jay, Thomas Jefferson, James Madison, and George Washington. He is saying he'll beat Franklin on national television.)

I'll take my Awesome Auger and sow your Quaker oats!

(Awesome Auger was one of the products that Mays advertised. Mays will harvest Franklin's Quaker Oats using an auger, which references the fact that Franklin looks like the guy on the Quaker Oats cans, as well as the fact that Pennsylvania, Ben Franklin's representing state, began as a settlement of the Quaker religious sect, from which its nickname of "The Quaker State" was drawn.)

I'll shoot your rhymes down like a regiment of redcoats!

("Redcoats" was the name given to British soldiers fighting the American colonists during the American Revolutionary War, and regiment is a group of soldiers. Mays is saying that he will out-rhyme Franklin.)

I'm lord of the pitch and leader in home sales!

(Mays was nicknamed "Lord of the Pitch". He was one of the most successful infomercial salesmen.)

You're just a lumpy pumpkin who invented the mail!

(Mays makes fun of Franklin's obesity, comparing his body size to a pumpkin. Franklin created a modern postal system for the USA and reorganized the mail shipments between England and the USA.)

Benny's got kite 'n key, but you're in for a shock

(Franklin performed an experiment in which he tied a key to a kite and flew it during a thunderstorm. His experiment led to a shock from the electricity, but Mays says he will shock Franklin more than that.)

When I strike you with bolts from my lightning rod cock!

(Franklin is saying that Mays' raps are very horrible and he is protesting them. This is also a reference to the Intolerable Acts imposed by Great Britain, which were protested by many colonial Americans.)

It takes just one easy payment for me to whoop your ass!

(In his commercials, Mays would often end by saying, "It takes just one easy payment of $X" and throw in a bargain. One payment means you only pay for the price once, so Franklin says that it will be simple to beat Mays only one time.)

(Mint is the name of the place where money is created. He may also be referring to himself as hypothetically "fresh", like the mint herb. Franklin is on the $100 bill. He was also very intelligent in different areas, even though he only went to school for two years. "Money" is also slang for "exceptional" or "notable".)

("Join, or Die" was a political cartoon drawn by Ben Franklin, which was used to encourage the colonies of Britain to unite and fight against it. He uses this in a way saying that he should join or die, which could also talk about Mays' death in the battle. Benjamin is a slang term for a $100 bill and is also Franklin's first name, which means that the rap is all about him. It also references the song "It's All About the Benjamins" by Puff Daddy.)

(This is another one of Mays' catchphrases. His commercials would normally have more to offer, so he says, "But wait, there's more!" In the battle, he had more raps against Ben Franklin, but he would never be able to finish them, since he dies at that moment from a fatal heart attack, referencing how Billy Mays died in real life. It also fulfills Franklin's previous line, as Mays died instead of joining him.)

Is there anyone out there who could finish this battle? Anyone? Anyone…

(The Announcer is saddened by Billy's death, and says someone else must finish the rap battle for him.)

(Vince Offer is stating that he can continue battling for Mays, as he is another famous salesman. His products used to compete with Mays' products to see whose was better, and now he will help Mays finish the battle. The iCan Benefit was a health insurance company endorsed by Billy Mays, and Offer may be stating this as a reference to it.)

You following me, camera guy? 'Cause it's about to get furious!

("You following me, camera guy?" was one of Offer's signature phrases said in his ShamWow! commercial, often said when he picks up the pace in his marketing ads, indicating he is picking up the pace. Here, he is doing this with his raps, which are about to get intense.)

You're gonna love my nuts until you're bi-focal-curious!

(Another one of Offer's quotes, used in an ad for the Slap Chop when he chops up nuts. "Nuts" is also a slang term for testicles, which, if a male such as Franklin were to enjoy, would make him bi-curious, or unsure of his sexuality. Bi-focals, more commonly known as glasses, were one of Franklin's many inventions, so he plays on the words that he will become "bi-focal-curious".)

Your boy George chopped down trees. You couldn't break a piece of balsa!

(George Washington was a Founding Father, just like Franklin. One of Washington's myths was that as a child, he chopped down his father's cherry tree, and admitted he was the one to cast it asunder. While Washington was capable of chopping down a tree as a child, Offer is stating that Franklin couldn't even break a piece of the extremely weak wood that comes from the balsa tree. Boy George is an androgynous singer, and Offer makes fun of Washington by comparing him to this effeminate individual.)

(The Slap Chop is a product that Offer advertised, which could slice any food into bits. Vince is going to do this to Franklin's face, which has a double chin from being plump. Afterwards, he will use his Slap Chop to make a salsa out of Franklin.)

Your style's so broke, they call you "Poor Richard"!

(Franklin published a Farmer's Almanac called the Poor Richard's Almanack. Offer says that Franklin's rapping style is so broke that it's poor like the title of his almanac.)

It's bad enough I gotta see you every time I tip a stripper!

(Offer was known for being arrested after assaulting a hooker who bit his tongue. Benjamin Franklin is on the U.S. one hundred-dollar bill. Offer states that he uses this to tip strippers and gets tired of seeing Franklin's face on the bill since he's giving away money.)

Vince against a Founding Father is just too bad,

(Vince faces against a Founding Father, stating that it is a pity that he had to battle him for the reason said in the next line.)

'Cause after this, America is gonna lose a Dad!

(Franklin was a Founding Father, or a "Dad" of America, so Vince says that he beat Franklin so hard that America lost one of its dads. In the battle, Vince holds a belt, which is known as the object fathers use to spank their children. This is to show that Vince is punishing Franklin with his rhymes.)

Retrieved from "https://epicrapbattlesofhistory.fandom.com/wiki/Billy_Mays_vs_Ben_Franklin/Rap_Meanings?oldid=1463802"
Community content is available under CC-BY-SA unless otherwise noted.