Blackbeard battled Al Capone in Blackbeard vs Al Capone. He was portrayed by Nice Peter.

Edward Teach (or Edward Thatch), better known as Blackbeard, was born circa 1680. He was an English pirate who operated around the West Indies and the eastern coast of the American colonies. He is one of the most infamous and notorious pirates in recorded history.

Teach was most likely born in Bristol, England, and may have served aboard privateer ships during Queen Anne's War. Teach joined the crew of Captain Benjamin Hornigold around 1716 and was placed in command of a sloop he had captured. The two engaged in numerous acts of piracy. After Hornigold had retired, Teach captured a French merchant vessel, renamed her Queen Anne's Revenge, and became a renowned pirate.

His thick black beard and fearsome appearance, which he used to strike fear in the ones he robbed, earned him the name "Blackbeard". He would raid merchant ships, stealing all the valuables, liquor, food, and weapons, letting the crew go if there was no resistance. If they attempted resistance, they would all be killed or left behind on a deserted island. Despite his infamy, he wasn't the most successful of pirates, having only a short reign of terror between 1716–1718. On November 22nd, 1718, Blackbeard and several of his crew members were killed by a small force of sailors led by lieutenant Robert Maynard, who were arranged by Alexander Spotswood, the governor of Virginia, to try and capture Blackbeard. It took five gunshots and twenty cutlass wounds for Maynard to kill Blackbeard, after which he tied his head with rope and hung it up on his ship's bow. His body was then thrown overboard.

I come strapped with six pistols and a dagger.

Walk under the black flag with a scallywag swagger!

Ain't no parrot on my shoulder and no rings in my ear.

Beef with me? Please! I'm the high seas Caesar!

My cold heart is many degrees beneath the deep freezer!

You're an obese greasy sleaze squeezing a diseased peter

That no skeezer would touch if she had fifty foot tweezers!

Don't start a war with me; you're not hardcore!

I'll pimp-slap those face scars of yours: port and starboard!

You spent time in Alcatraz. I'm sure you were fine,

If you dropped the soap as little as you drop dope rhymes!

But I'm gonna sink you faster than your income tax evasion

When I toss you overboard like a mob abomination,

So prepare to learn the Davy Jones' locker combination!

Forty cannon on the Queen Anne; your gang can't stop it!

I'll pilfer all your rum and sell it back at a profit,

'Cause I'm a criminal legend with a badass name!

You're a fat thug with an STD in his brain!

Any sausage eatin' mobsters named Al Capone should cross the

Yar, I went out on an adventure, but I was in my blimey prime.

See, I'd rather lose me head than lose me friggin' mind!

A billboard ad for the video 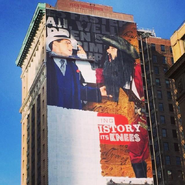 An ad for the battle on the side of a building

Blackbeard with Al Capone on the green screen
Add a photo to this gallery
Retrieved from "https://epicrapbattlesofhistory.fandom.com/wiki/Blackbeard?oldid=1471912"
Community content is available under CC-BY-SA unless otherwise noted.