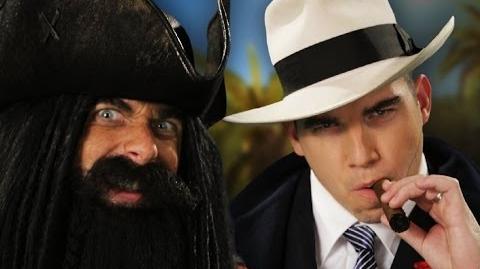 Blackbeard vs Al Capone is the thirty-fifth installment of Epic Rap Battles of History and the second episode of Season 3. It features the ruthless pirate, Blackbeard, rapping against the Prohibition era mobster, Al Capone. It was released on October 21st, 2013.

I come strapped with six pistols and a dagger.

Walk under the black flag with the scallywag swagger!

Ain't no parrot on my shoulder and no rings in my ear.

Beef with me? Please! I'm the high seas Caesar!

My cold heart is many degrees beneath the deep freezer!

You're an obese, greasy sleaze squeezing a diseased Peter

That no skeezer would touch if she had fifty foot tweezers!

Don't start a war with me; you're not hardcore!

I'll pimp-slap those face scars of yours: port and starboard!

You spent time in Alcatraz. I'm sure you were fine

If you dropped the soap as little as you drop dope rhymes!

I had syphilis, yeah. Well, you're a huge dick

With a scurvy ridden ship filled with bilge rat pricks!

I run an intricate criminal syndicate, so show respect,

Or get that tongue ripped out your neck and shoved straight up your poop deck!

Slapping bitch ass teaches back since I was fourteen.

You ain't a tough guy; my kids dress up like you for Halloween!

I'll use that fuse in your hat to light up you and your buddies,

Then burn your sailboat down and collect the insurance money!

Then maybe they find your bloated body dead and washed up on the beach.

This is Capone rapping and I'm capping this Captain, capisce?

But I'm gonna sink you faster than your income tax evasion

When I toss you overboard like a mob abomination,

So prepare to learn the Davy Jones' locker combination!

Forty cannon on the Queen Anne; your gang can't stop it!

I'll pilfer all your rum and sell it back at a profit,

'Cause I'm a criminal legend with a bad ass name!

You're a fat thug with an STD in his brain!

C'mon, they chopped your head off and they hung it from a rope.

The only legend you left was your prohibition on soap!

I mean, that rat nest beard's trapped so many crumbs,

This bum could get marooned and still eat lunch for a month!

Rap so hard, call me Al…dente.

Take your little sloop, John B, and go home!

Any sausage eatin' mobsters named Al Capone should cross the,

Yar, I went out on an Adventure, but I was in my blimey prime!

See, I'd rather lose me head than lose me friggin' mind!

From likes of you's, I got nothing to fear.

'Cept maybe the evil beasties you got nestin' in your beard!

C'mere this is my town, I could buy your whole crew.

I got the DJ in my pocket, he stops when I tell him to!

I'm the emcee assassin with pinache like Edward Kenway!

Rhymes so hard you can call me Al Dente!

Go back Charlotte or wherever slum you call home!

Cause this is the Southside, baby, and you just got Capwned!

You can feed your grubby crew a lunch for a month! 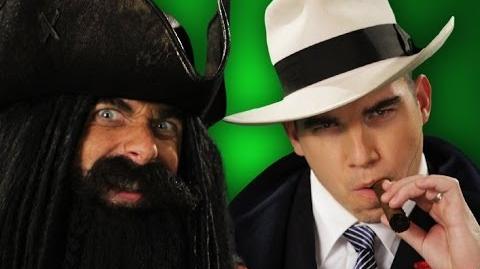 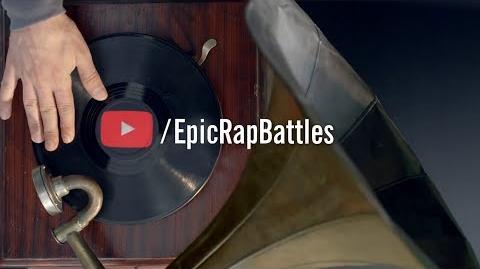 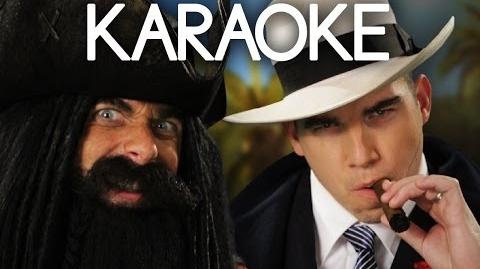 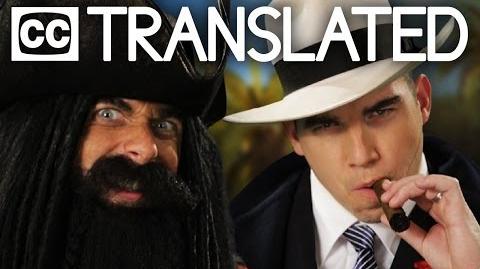 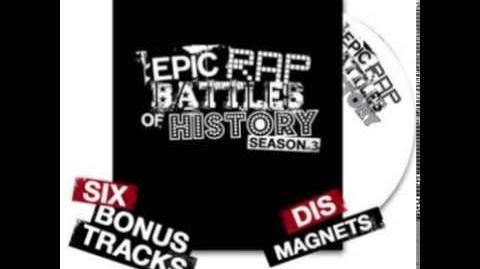