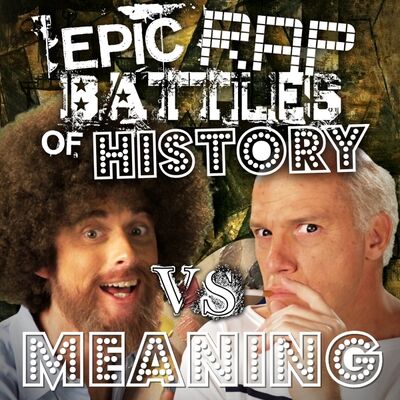 I am the greatest: the modern art Muhammad Ali!

(Many people consider Pablo Picasso to have been the greatest painter of modern art much like Muhammad Ali was one of the world's greatest boxers. Ali famously said "I am the greatest!" in an interview after claiming the World Heavyweight Championship. Coincidentally, Ali also makes his appearance in the next battle.)

(Picasso had some paintings with deformed faces. Salvador Dali, another Spanish painter from Picasso's time, had a famous painting called The Persistence of Memory, in which he painted melted clocks. Face melting is also a term used to describe the audience reaction from an exceptionally remarkable performance, usually at a rock or hip-hop concert.)

Your whole body of work is a fluffy mountain of crap!

(Picasso mentions how Ross calls mountains "fluffy", and says that his art is horrible. "Fluffy" can also mean superficial or lacking substance. Ross' paintings, due to their theme, also frequently included mountains.)

You're the PBS version of Nickelback!

(Nickelback is a band infamously known for being a punching bag in music and is considered to be the worst band ever by many people. Picasso says Ross is the Nickelback of PBS, or the worst show/person on it.)

But I think you must be a genius 'cause with zero training,

(Ross trained himself by watching a German television show almost identical to his own. Picasso calls him a genius, but not in a positive way, which is explained in the next line.)

You made millions teaching people how to suck at painting!

(Ross was a painter on the PBS show The Joy of Painting. On his show, he taught the viewers how to paint with oil paints. Picasso says that Ross showed people how to fail at painting while getting paid millions using someone else's skill.)

Why don't you go back home and beat your brush, you chump?

I could make better art with my wiener, Lump!

(Picasso had a pet dachshund, also known as the wiener dog, named Lump, and he says that he can draw better than Bob using his dog. Wiener is also a slang term for penis, which could be alluding to the painter Pricasso, who paints with his penis.)

I'm so glad you could join me today,

(Bob Ross always opened each episode of his show by saying something along the lines of "I'm so glad you could join me today." He is happy Picasso could show up.)

So I could teach you how to feel some joy when you paint.

(Ross references his PBS television show, The Joy of Painting, in which he teaches people to paint in a happy manner. This is a contrast from Picasso's solemn attitude towards his art.)

You're a moody little genius, always so serious.

(Pablo Picasso was an angry, serious, and intelligent man.)

I know: you must be on your Blue Period!

(Picasso's Blue Period was a time when he painted somber and morose works of art, mostly in shades of blue. A woman's period is the event in her menstrual cycle where she has not become pregnant and discards the unused egg, along with other material. The imbalance in her hormones triggered by this event can sometimes alter her mood, often towards anger or sadness. This being the case, Ross compares Picasso to a woman affected by her period, as he finds his opponent's mental state at the very least is much like hers. Ross combines the concept of "feeling blue" or sad with the concept of "being on one's period".)

(Picasso's works have a tendency to fill viewers with sorrow, or depression-like feelings. In contrast, Ross would often describe the objects he was drawing, most commonly trees, as "happy little" trees, rocks, etc.)

Call me Jackson Pollock because I splatter MCs

(Jackson Pollock is known for his famous paintings which were created simply by splattering different colors of paint onto the canvas. Ross says here that he can pin his opponent to the mat in a rap battle with his talent compared to theirs.)

With the voice that soothes, so let's do this.

(Ross uses a soothing voice and made a vow never to yell again after leaving the military where he considered himself a "mean" man. Unintentionally, after his death, Ross has been named the Father of ASMR (Autonomous Sensory Meridian Response) which is a tingling sensation many people experience in the scalp in response to certain visual or auditory stimuli. Ross' calm voice and gentle painting techniques triggered that sensation in some people, even leading to a community of people on Youtube to make ASMR videos. He is also famous for saying "Let's do this" every time before he starts a painting.)

I'll twist you up like you're a Rubik's Cubist!

(Pablo Picasso was famous for making cube-like designs, known as cubism. Ross says he'll rearrange Picasso like a Rubik's Cube, a puzzle cube that must be twisted and turned until solved by assigning a single, different color to each side.)

Don't use that word like you know what it is!

(Picasso infers that because Bob Ross has no formal art training, he wouldn't know what cubism is.)

You painted thirty thousand pictures of bushes and sticks!

(When asked about how many paintings he had made in his life time, Ross did in fact give an estimate of 30,000. Picasso taunts how Ross only knew how to paint landscapes and simple nature objects, where as Picasso's works have a vast range of subjects. In other words, Picasso says Ross has only one talent. Picasso also adds the inside joke of partnering bushes being pubic hair and sticks being the penis.)

Does your audience know that you stole your whole show?

(Ross had copied and studied off of a German television show, The Magic World of Oil Painting, to produce his show of a similar name and premise, The Joy of Painting.)

You just ripped off your teacher, and added an afro!

(A continuation of the previous line, Picasso says Ross copied his teacher, German painter Bill Alexander, who taught him the wet-on-wet painting technique. According to Picasso, the only difference between the shows is Ross added his iconic afro.)

(Picasso has an extremely long and flowing name, which to him accentuates that he comes from a wealthy and aristocratic background. While the practice isn't used as much by the Spanish nowadays, such long names have been used to trace ancestry as well as being honorific of one's forbears, in the same way that Arab or Slavic names would be.)

(By contrast, Ross has a rather mundane name compared to Picasso's long name, and Picasso taunts him with this, as Ross' full name is Robert Norman Ross. Picasso nonetheless hands off to Ross in the fashion of old-time TV reporters. Picasso even twists the dial on an old TV set as he does this to change stations, with brief appearances from Billy Mays on Channel 10, Mister Rogers on Channel 13, and the Fourth Doctor on Channel 24, the numbers referring to their respective battle numbers.)

Well, Bob is dropping bombs like this is Guernica.

(A reference to the Nazi bombing of Guernica, Spain in 1937, from which Picasso drew inspiration for a painting of the same title. Ross states that he has been throwing devastating insults at Picasso throughout the battle, and compares their impact to that of Nazi bombs on his home country.)

(Ross served twenty years in the United States Air Force, starting at age 17, retiring with the rank of Master Sergeant. Though not a pilot, Ross might know a few things about dropping the bombs referred to in his previous line.)

My technique will make your mistress weep,

(A painter's "technique" can refer to how he paints, or what he paints with. Ross, however, implies that his sexual prowess, also called a "technique", will make Picasso's lover weep. Picasso's mistress, Dora Maar, was the subject of his 1937 painting, The Weeping Woman, because he saw Maar as a "weeping woman", which he explained in a biography.)

Put her to sleep, elbow drop her dreams; I go deep,

(Marie-Thérèse Walter was the model for Picasso's Le Rêve (translation: The Dream), in which she is asleep. The picture was given a six-inch tear in 2006 when its then-owner accidentally put his elbow through it. This also makes a reference to the wrestling move, the "elbow drop". This also could reference Ross' connection with ASMR which some people use to help them sleep. Ross implies he would have sex with Picasso's mistress after putting her to sleep.)

And I keep it mellow like some cadmium yellow.

(Cadmium Yellow is known for looking calm and adding life and vibrancy to a painting. As stated prior, Ross "mellowed out" when he was discharged from the Air Force, making him a calm person. Multiple plays exist here; there's a citrus soda called Mello Yello and a song from the 1960's British singer Donovan called "Mellow Yellow".)

I'm a bright like titanium white kind of fellow.

(Titanium white is the brightest of all shades of oil paint and is the closest to actual white an oil paint can be. Ross says he's "bright", meaning smart, astute, or observant. Bright hues are also associated with purity and happiness, such as what Ross felt in life.)

Don't believe in mistakes unless you step to me.

(Ross would always say that there is no such thing as a mistake, just a happy accident, but Ross thinks trying to battle against him is the only mistake you could make.)

Yo Pablo, you just got your happy little ass beat!

(Ross is known for saying bushes and other items he paints are "happy little _____". Ross is saying that Picasso has just been beaten by him. "Yo Pablo" may also reference Picasso's painting Yo, Picasso, translated as "I, Picasso.")

Retrieved from "https://epicrapbattlesofhistory.fandom.com/wiki/Bob_Ross_vs_Pablo_Picasso/Rap_Meanings?oldid=1484341"
Community content is available under CC-BY-SA unless otherwise noted.