Bobby Orr made a cameo appearance in Tony Hawk vs Wayne Gretzky. He was portrayed by EpicLLOYD.

Robert Gordon "Bobby" Orr, OC was born on March 20th, 1948, in Parry Sound, Ontario, Canada. He is a former professional ice hockey player, widely acknowledged as one of the greatest hockey players of all time. Orr used his ice skating speed, scoring, and play-making abilities to revolutionize the position of defenceman. He played in the National Hockey League for twelve seasons, starting ten with the Boston Bruins followed by two with the Chicago Black Hawks. Orr remains the only defenceman to have won the league scoring title with two Art Ross Trophies. He holds the record for most points and assists in a single season by a defenceman. Orr won a record eight consecutive Norris Trophies as the NHL's best defenceman and three consecutive Hart Trophies as the league's most valuable player (MVP). Orr was inducted into the Hockey Hall of Fame in 1979 at age 31, the youngest to be inducted at that time. After his hockey career, he became a well-known scout for many professional teams. He also spends time talking to and mentoring young skaters.

Bobby Orr was seen driving a Zamboni during Wayne Gretzky's first verse when he said the line, "So let me smooth it out like I'm a damn Zamboni!" He replied with "Eyy!" and later appeared in Gretzky's third verse during the line, "You've been going downhill since Pro Skater 3!", exclaiming "Ooh!"

Bobby Orr on a Zamboni 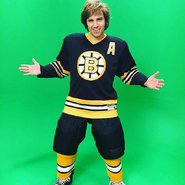