David Paul Brown, also known as Boyinaband, was born on March 27th, 1986, in Telford, Shropshire, England. He is an YouTuber, musician, rapper, songwriter, comedian, and actor. Brown is known for his song "Don't Stay in School", being the lead vocalist for the rock band You And What Army and collaborations with other YouTubers such as iDubbbz, Roomie, Andrew Huang, TheOdd1sOut, Emma Blackery, Dan Bull, Jaiden Animations, Corpse Husband and PewDiePie. His work spans various genres including electronic, hip hop and heavy metal as a producer, vocalist, rapper, songwriter, DJ and instrumentalist.

Among other endeavors are his former electronicore band You and What Army, which had various successes playing Download Festival and Sonisphere Festival. The band was put on hiatus in 2014. Other video content of his include vlogs, music tutorials, education, comedy skits, raps, and challenges. 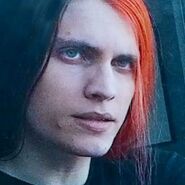 Boyinaband's YouTube avatar
Add a photo to this gallery
Retrieved from "https://epicrapbattlesofhistory.fandom.com/wiki/Boyinaband?oldid=1491904"
Community content is available under CC-BY-SA unless otherwise noted.