Epic Rap Battles of History Wiki
Register
Don't have an account?
Sign In
in: ERB Crew, Maker Studios, Behind the Scenes,
and 2 more

Brian Jaggers worked as an editor for five behind the scenes videos from Romeo and Juliet vs Bonnie and Clyde to Steven Spielberg vs Alfred Hitchcock.

Brian Jaggers was born on September 27th, 1985, in Missouri, United States. He is an editor, director, producer, filmmaker, and former member of the Epic Rap Battles of History crew. Currently residing in Los Angeles, California, Jaggers is now doing editorial work for the television channel History. His website can be found here. 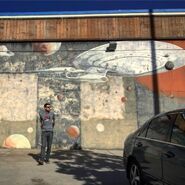