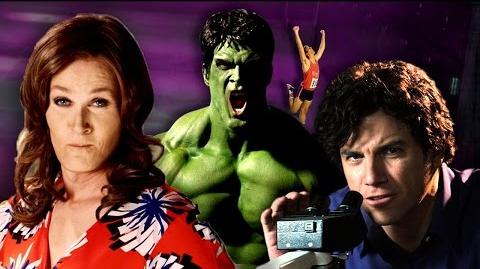 Bruce Banner vs Bruce Jenner is the sixty-third installment of Epic Rap Battles of History and the fifth episode of Season 5. It features comic book superhero and scientist, Bruce Banner, rapping against former Olympic athlete, Bruce Jenner. Partway through the battle, both transform into the Hulk and Caitlyn Jenner, respectively. It was released on June 29th, 2016.

EpicLLOYD as Bruce Banner and the Hulk (voice only)

[Note: Bruce Banner is in purple and Bruce Jenner is in brown.]

I'll school you in this battle of the baddest Bruce,

With your He-Man haircut and your Daisy Dukes.

I hear you're good at running; you're just like the Flash,

Especially in the 100 meter ditch-your-wife dash!

So let me break you down on a molecular level:

You turned one gold medal to a lifetime of green!

The most overrated athlete anyone's ever seen!

You need to carry fatherhood across that finish line!

(Argh!) Kept up with the Kardashians, but left some kids behind!

Now, run along; you'll thank me 'cause I'm getting kinda cranky,

And trust me, you wouldn't like me when I'm angry!

I think you're in your element when you're behaving badly.

Honestly, you're kinda boron when you're happy.

Decathlon athlete, blast through you like some gamma rays!

The truth is, there's no truce between the Bruces!

You're a drifter being useless; I'm a winner, no excuses!

(Uh!) Beautiful women all up on my jock!

I got a home gym; check me on the cereal box, doc!

If it wasn't for your cousin, you'd never have sex!

(Oh!) You're so strong when you get mad!

Too bad you can't go back and protect your mom from your dad!

(Urrrgh!) That painted face don't give you class!

Just one more thing Bruce do for cash!

That's my teenage daughter, man; I have to forbid this!

I'll put a javelin through your jolly green discus!

Kylie not the type of girl I'mma let you smash on!

(Hmm.) You'll get the medal without the decathlon!

(Argh!) Hulk is Hulk; no identify as man!

No gender issue; this Jenner issue!

Just you being you is enough to diss you!

But you don't need to blame yourself!

You're a tiger; stop trying to tame yourself!

You gotta be big enough to contain yourself,

And get hit with a little forgiveness!

Be green; it ain't none of my business,

But if you think you looking good in those torn-ass clothes,

You're lying, which means you need a new wardrobe!

(Aw!) The vision of those shorts kinda scarred me.

What'd you just rage at, a Barney-themed party?

That's probably not something you seen as a child!

Not one day did you see your daddy smile!

"Hulk not strong enough to deal with denial!"

Examine this under your microscope:

You got no neck, but you still fucking choked!

After battling me, you're gonna always be pissed,

So the Hulk will stay forever; neither Bruce will exist!

My transformation is a giant celebration

Say hi to Caitlyn, the voice of the next Jenneration

You're scared of the monster you have trapped inside

I changed on purpose like a butterfly of pride

You look like a melted action figure of Glenn Close

Went from cover of Wheaties to ugly bunches of gross

While some of these are not actual lyrics, these are thoughts that were written on a piece of paper in the behind the scenes video for possible lyrics: 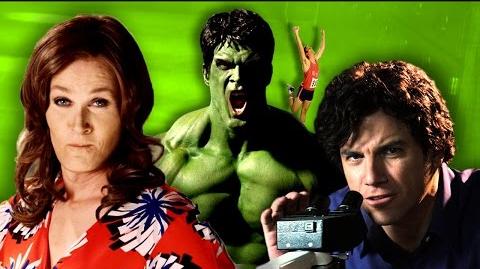 Bruce Banner vs Bruce Jenner. ERB Behind the Scenes 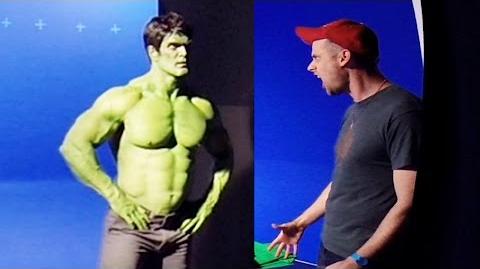 Bruce Banner vs. Bruce Jenner - Deeper Behind the Scenes 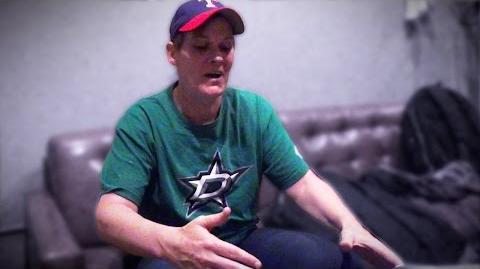