Caitlyn Marie Jenner, formerly known as William Bruce Jenner or simply Bruce Jenner, was born on October 28th, 1949, in Mount Kisco, New York. She is a retired gold medal-winning track star who set a world record in the decathlon at the 1976 Summer Olympics. As Bruce, Jenner appeared on the popular reality show Keeping Up with the Kardashians, alongside relatives. Later, it was revealed in a Diane Sawyer interview that Jenner is transgender and identifies as female. In June 2015, Jenner announced on Twitter that she is officially a woman, now known as Caitlyn.

I think you're in your element when you're behaving badly.

Honestly, you're kinda boron when you're happy.

Decathlon athlete, blast through you like some gamma rays!

The truth is, there's no truce between the Bruces!

You're a drifter being useless; I'm a winner, no excuses!

(Uh!) Beautiful women all up on my jock!

I got a home gym; check me on the cereal box, doc!

If it wasn't for your cousin, you'd never have sex!

(Oh!) You're so strong when you get mad!

Too bad you can't go back and protect your mom from your dad!

That's my teenage daughter, man; I have to forbid this!

I'll put a javelin through your jolly green discus!

Kylie not the type of girl I'mma let you smash on!

(Hmm.) You'll get the medal without the decathlon!

But you don't need to blame yourself!

You're a tiger; stop trying to tame yourself!

You gotta be big enough to contain yourself,

And get hit with a little forgiveness!

Be green; it ain't none of my business,

But if you think you looking good in those torn-ass clothes,

You're lying, which means you need a new wardrobe!

(Aw!) The vision of those shorts kinda scarred me.

What'd you just rage at, a Barney-themed party?

That's probably not something you seen as a child!

Not one day did you see your daddy smile!

"Hulk not strong enough to deal with denial!"

Examine this under your microscope:

You got no neck, but you still fucking choked!

After battling me, you're gonna always be pissed,

So the Hulk will stay forever; neither Bruce will exist!

My transformation is a giant celebration

Say hi to Caitlyn the voice of the next Jenneration

You're scared of the monster you have trapped inside

I changed on purpose like a butterfly of pride 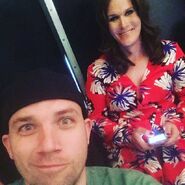 A picture of Caitlyn Jenner and EpicLLOYD posted on his Facebook account
Add a photo to this gallery
Retrieved from "https://epicrapbattlesofhistory.fandom.com/wiki/Bruce_Jenner?oldid=1459724"
Community content is available under CC-BY-SA unless otherwise noted.