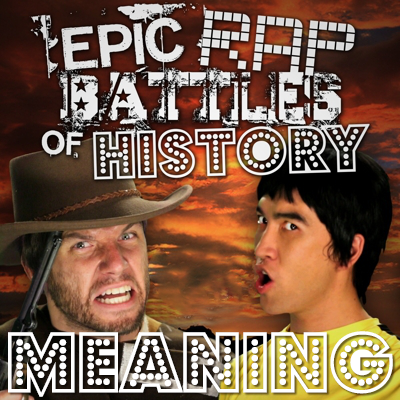 (Fist of Fury is a movie that Bruce Lee was in. When he says he has the "baddest fists of fury", he means his attacks were powerful, as he is considered to be one of the greatest martial artists ever, if not the greatest of all time.)

(In many of his movies, Lee could beat an entire group of martial artists. During the movie Enter the Dragon, he fights against Han, who has a switchable arm prosthesis; during the fight, he switches it to an animal claw.)

(Eastwood was considered insane, or "talking shit", by many people after he spoke to an empty chair during the 2012 Republican Convention, which is explained later in this transcript. Furthermore, 'talking shit' is a euphemistic way of describing 'trash talking', or verbally tearing into an opponent in a competition where direct physical contact is prohibited. Eastwood's characters in movies like Dirty Harry and Sudden Impact generally trash talk their opponents. Like Lee had done with his opponents in many of his movies, he will punch Eastwood in the jaw so hard, he won't be able to speak.)

("Waaataaaw" is a famous sound Lee made, which he often yelled when he did Kung Fu moves. He didn't use much dialogue for his movies when he was fighting against someone, as he let his actions do the talking. Basically, all he needs to do to beat Eastwood is to fight him and yell "Waaataaaw!" This contrasts him with Eastwood, whose characters, as stated above, typically spout catchphrases or verbally engage their enemies while they fight.)

Your movies, they bore us. They're slow as a tortoise!

(Many of Eastwood's movies have scenes where everyone stands around looking at each other, and their plots unravel really slowly, at a tortoise's pace, according to Lee.)

I'm the king of nunchucks. I fucked up Chuck Norris!

(Lee was famous for being a master with nunchucks, having made the weapons popular in his movies. In Return of the Dragon, Lee had a fight with Chuck Norris.[1] Norris is famous for being associated with exaggerated feats and victories, but in the fight, Bruce Lee emerged victorious. Also, EpicLLOYD, the actor who portrayed Clint Eastwood in this battle, also portrayed Norris in Abe Lincoln vs Chuck Norris.)

(Jeet Kune Do is a style of martial arts invented by Lee. Slipper shoes are Lee's normal footwear in his fighting movies, so when he tells Eastwood to taste his slipper shoe, he means he's gonna jump kick him in the mouth.)

(Play on words: Kung fu is another famous style of of martial arts, as well as the first style Lee learned. Many of the forms and techniques of different types of Kung Fu were incorporated into Jeet Kune Do, which was a hybrid style that included techniques from other martial arts as well. F-U is the abbreviated way of saying "fuck you". Lee was also capable of doing two finger push-ups, a difficult technique that some Chinese people could perform. When he says he's doing a two finger push-up, he actually means he's giving Eastwood the finger (twice), as well as doing a push-up using only his two middle fingers, as seen in the video.)

(Lee's battle cries sound very high pitched and feminine. "Moves Like Jagger" is the name of a song by Maroon 5, which talks about a man's ability to impress a woman with his dance moves. He compares his fighting moves to the distinctive and bold dance moves of Mick Jagger, frontman for the English band The Rolling Stones. Eastwood uses it as an insult, saying that Lee's moves are more like ridiculous dance moves than fighting.)

(A Pu-Pu platter is a tray full of appetizers in American-Chinese restaurants. It's also quick to pass through your digestive system, so Eastwood claims he'll verbally rip through Lee faster than the dish. Another thing about it may be that it sounds like "poo-poo", meaning he could run him down faster than diarrhea.)

(Lee's films were all written and filmed in Hong Kong, and hence the dialogue is in Chinese. When they were distributed in America, the dialogue was re-recorded, or "dubbed", in English. Also, in this part, Eastwood's voice is not with sync to his lyrics, illustrating the effect. With this and Eastwood's previous line, he's saying he spent too much time in the gym when he should've been working on the movie's dubbing, instead.)

(Just like he did in his movies, Lee would occasionally scream during a fight with enemies.)

(A sweatshop is a type of factory where workers, commonly stereotyped as Chinese, make things such as toys or electronics in extremely poor working conditions. Eastwood tells Lee he shouldn't be battling people, and should instead be working in a low-quality factory.)

So go ahead, make my iPod.

(As a reference to Eastwood's signature line from Sudden Impact, "Go ahead, make my day", he tells Lee to make him an iPod, one of the things that are constructed in sweatshops, which goes back to what he said in his previous line.)

(Lee often jumps around when he starts fighting to warm up, and it makes him seem like he's dancing. Because of this, Eastwood isn't very intimidated by them.)

Fuck you, dude. I even squint better than you.

(There is a stereotype that many Chinese people, like Lee, appear to be squinting their eyes. Eastwood normally squints his eyes in his movies, which later became his trademark. Because of this, he's saying that his squints are even better than Lee's.)

(Oooh…) I beat the good and the bad. You must be the ugly!

(One of the movies Eastwood starred in was titled The Good, The Bad, and The Ugly. Lee is saying that he has beaten both the good guys and bad guys, and all that's left is the ugly, which in this case is Eastwood. Beginning his second verse, Lee also screamed referencing him in the movies, about to begin a fight with his signature yell.)

(Messing up someone's face means to physically beat said person up, leaving his face battered and bruised. Here, Lee is saying that he could make Eastwood's face look bad, but he was already born hideous, which insults him again by calling him ugly like he did in the last line.)

Go tug your pistol for a fistful of your million dollar babies!

(There are two references to Clint Eastwood's movies here: A Fistful of Dollars and Million Dollar Baby. Lee tells Eastwood to tug his "pistol", or penis, for a "fistful of his million dollar babies", or semen, which in short, is telling him to go masturbate. This could also be a reference to the number of sexual affairs Eastwood had which resulted in the birth of many illigitimate children aside from the children he had from his married relationships. So essentially Lee could  be telling Eastwood to masturbe instead of cheating on his wife with other women and producing more babies)

(Eastwood's movies were smashing successes in the 80's, but now, not as much. Most people believe Eastwood was starting to go insane because…)

(…in mid-2012, Eastwood was paid to speak at the Republican Party National Convention (RNC). Rather than speak, Eastwood chose to do a skit talking to President Barack Obama, who was preparing for the DNC instead, so Obama wasn't there across from Eastwood as he carried on. Eastwood decided to talk to an empty chair, pretending Obama was sitting in it. It appeared to viewers…)

(…that Eastwood was just talking to a chair, to hear himself speak. In other words, Eastwood should just go and rap against a chair instead of Lee.)

("Do you feel lucky, punk?" is a frequent question Eastwood asks in the Dirty Harry films, and "That's what I'm asking" is another quote when Eastwood asks a rhetorical question.)

You can't be too tough. You got killed by an aspirin.

(Lee died due to an allergic reaction to a painkiller, so Eastwood says that he can't really be such a great fighter if an aspirin was the cause of his death.)

(A racist joke on how Asians have small penises, or "peckers". The one inch punch is Lee's signature move, an exhibition strike from a very short distance still able to generate an impressive amount of power, so Eastwood says that's the same size as Lee's penis.)

Leave the rapping to me. Stick to Chinese Checkers.

(Eastwood doesn't think his opponent is skilled at rapping, and he should just go back to playing Chinese Checkers. Chinese Checkers wasn't actually invented by the Chinese, but Eastwood just says this since many people in China play it.)

(Clint Eastwood is saying if they had a rematch, he'd win again, but no one would believe that could actually happen, as Lee had died before he could finish a sequel.)

(Bruce Lee's only son, Brandon, died of an accidental gunshot wound while filming The Crow in 1993, so Eastwood believes Lee's family has a good run of bad luck, with many of its members dying at a young age. This also refers to how both family members were both actors, but neither could live to make a sequel to one of their movies since they died too soon.)

Retrieved from "https://epicrapbattlesofhistory.fandom.com/wiki/Bruce_Lee_vs_Clint_Eastwood/Rap_Meanings?oldid=1477678"
Community content is available under CC-BY-SA unless otherwise noted.