Cam Greely acted as a guest writer for Ash Ketchum vs Charles Darwin, along with his personal friend and fellow fanmade battle maker, Mat4yo, and Tony Hawk vs Wayne Gretzky.

Cameron "Cam" Greely, better known by his stage name, VideoGameRapBattles or VGRB, was born on September 3rd, 1997. He is a YouTube rapper who was inspired by Epic Rap Battles of History to create the series known as VideoGameRapBattles, which mainly features video game characters. His series is one of the most popular fanmade rap battle series on YouTube. His Wikia account can be found here. 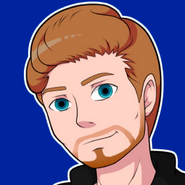 Cam Greely's YouTube avatar
Add a photo to this gallery

Retrieved from "https://epicrapbattlesofhistory.fandom.com/wiki/Cam_Greely?oldid=1467072"
Community content is available under CC-BY-SA unless otherwise noted.