The Cathedral of the Dormition is a Russian Orthodox church dedicated to the Dormition of the Theotokos. The cathedral is regarded as the mother church of Muscovite Russia. In its present form, it was constructed between 1475 to 1479 at the behest of the Moscow Grand Duke Ivan III by the Italian architect Aristotele Fioravanti. From 1547 to 1896, it is where the Coronation of the Russian monarch was held. In addition, it is the burial place for most of the Moscow Metropolitans and Patriarchs of the Russian Orthodox Church.

This is where Ivan the Terrible rapped during the second half of his second verse, majority of his third verse, and the entirety of his fourth verse, first appearing here during the line, "Ha! You've been poisoned!" Alexander the Great briefly rapped here during Ivan's second verse as he drank his poisoned drink and died. Frederick the Great also rapped here shortly before his death during Ivan's third verse.

Its design in the battle is influenced by Sergei Eisenstein's two-part Russian historical epic Ivan the Terrible. 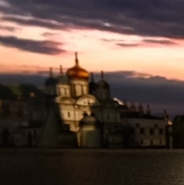 The Cathedral of the Dormition in the background of Red Square.
Add a photo to this gallery
Retrieved from "https://epicrapbattlesofhistory.fandom.com/wiki/Cathedral_of_the_Dormition?oldid=1450220"
Community content is available under CC-BY-SA unless otherwise noted.