Yekaterina Alexeyevna (Russian: Екатерина Алексеевна), better known as Catherine the Great or Catherine II, was born under the name Sophie Friederike Auguste von Anhalt-Zerbst-Dornburg on May 2nd, 1729, in Szczecin, Prussia, in modern-day Poland. She was the longest-ruling female leader of Russia, who came to power after orchestrating a coup to force her husband, Peter III, to step down from the throne.

Assisted by highly successful generals and admirals, she governed at a time when the Russian Empire was expanding rapidly by conquest and diplomacy. The period of Catherine's rule, the Catherinian Era, is often considered the Golden Age of the Russian Empire and the Russian nobility. She reigned from 1762 until her death at the age of 67 on November 17th, 1796, in Tsarskoye Selo, Russia.

It takes a Russian to take down a Russian. I'm Cat; I'm a cat; you're a rodent!

How are you the head of our state when the state of your head was such a crazy one?

(Oooh!) You're unbalanced like I unbalanced the European powers with the wars I waged!

I brought the Russian empire straight out the olden days and right into the golden age!

I'm the boss bitch that you just can't meddle with!

This whole battle's like Alaska 'cause I settled it!

That horse story is a pile of shit,

Though I do keep 'em chomping at the bit,

But you're never gonna get it, nyet!

Couldn't spin in my chamber if this were Russian roulette!

I'm picking up where Peter the Great left off!

Bringing sexy back to House Romanov! 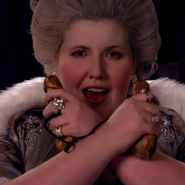 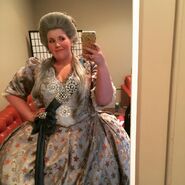 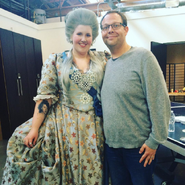 Retrieved from "https://epicrapbattlesofhistory.fandom.com/wiki/Catherine_the_Great?oldid=1457580"
Community content is available under CC-BY-SA unless otherwise noted.