Ernesto Guevara de la Serna was born on June 14th, 1928, in Rosario, Santa Fe province, Argentina. He was a Marxist revolutionary, physician, author, guerrilla leader, diplomat, and military theorist. A major figure of the Cuban Revolution, his stylized visage has become a ubiquitous counter-cultural symbol of rebellion and global insignia in popular culture.

Following the Cuban Revolution, Guevara performed a number of key roles in the new government. These included reviewing the appeals and firing squads for those convicted as war criminals during the revolutionary tribunals, instituting agrarian land reform as minister of industries, helping spearhead a successful nationwide literacy campaign, serving as both national bank president and instructional director for Cuba's armed forces, and traversing the globe as a diplomat on behalf of Cuban socialism. Such positions also allowed him to play a central role in training the militia forces who repelled the Bay of Pigs Invasion, and bringing Soviet nuclear-armed ballistic missiles to Cuba, which precipitated the 1962 Cuban Missile Crisis.

Guevara left Cuba in 1965 to foment revolution abroad, first unsuccessfully in Congo-Kinshasa and later in Bolivia, where he was captured by CIA-assisted Bolivian forces and summarily executed. He remains both a revered and reviled historical figure, polarized in the collective imagination in a multitude of biographies, memoirs, essays, documentaries, songs, and films.

[Note: Che Guevara is in green, while Guy Fawkes is in regular text.]

Ill rhyme-slayer from the '60s era!

Me and my guerrillas are a squad of killers! (Hoo!)

You're famous 'cause of Alan Moore's third best book!

All the children say, "We will be like Che!"

Asthmatic, but I'll take your breath away. (Gasp!)

You tried to rebel against James the first.

Here's a tip for your next plot: try to rehearse!

I've got my face on a magnet on your roommate's fridge.

Your head is on a spike up on London Bridge!

You had one job, cabrón: to strike a matchstick!

Got caught with a fuse like your bars: not lit!

You should have stayed anonymous, Epic Fail Guy.

Treat this battle like the gallows, and take another dive.

Sucks? Guy, you died for the Catholics:

A group with a bad "touching little boys" habit!

I'm the hardest Marxist ever graced a banknote!

You're an error-prone terrorist! Penny for the scapegoat!

All the people say, "We will be like Che!"

You had one job, Guido: to light a matchstick!

A group with a bad "touching little boy" habit!

It must be V for very bad hat! 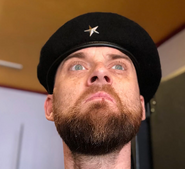 A preview of Guevara in the DeStorm Power compilation video

Retrieved from "https://epicrapbattlesofhistory.fandom.com/wiki/Che_Guevara?oldid=1485608"
Community content is available under CC-BY-SA unless otherwise noted.