Three Christmas elves assisted Santa Claus during his second verse against Moses in Moses vs Santa Claus. They were all portrayed by EpicLLOYD.

Christmas elves are little mythical creatures who work for Santa Claus and make the toys in their workshop for him to deliver to all the good little children. They are also sometimes portrayed as having other chores like feeding the reindeer. These elves typically represent joy and Christmas cheer.

[Note: The Christmas elves are in tan, while Santa Claus is in regular text.] 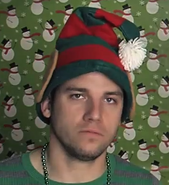 EpicLLOYD as a Christmas elf in "Santa is a Gangsta" 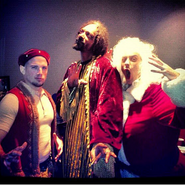 A picture of EpicLLOYD as an elf, Snoop Dogg as Moses and Nice Peter as Santa Claus posted on ERB's Facebook page
Add a photo to this gallery

Retrieved from "https://epicrapbattlesofhistory.fandom.com/wiki/Christmas_Elves?oldid=1450544"
Community content is available under CC-BY-SA unless otherwise noted.