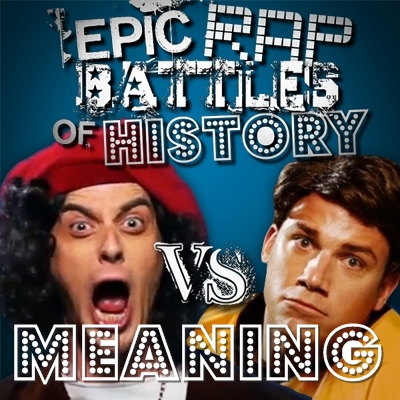 (Arrivederci is Italian for "goodbye" (literally "until we meet again"). Columbus was born in Italy and only sailed in representation of Spain. He says goodbye, and then leaves before he starts because he thinks the battle is pointless.)

…'Cause we both know in the end which of these captains gonna win!

(Columbus then returns while saying the battle isn't worth it when the outcome is too predictable; he believes he will beat Kirk.)

I'll show you how a real explorer handles a situation!

(Columbus thinks he's better than Kirk in the face of voyaging and that he can handle things that Kirk can't. In addition, Columbus will show how an explorer from real life handles something in contrast to Kirk, who is a fictional character from a science-fiction series.)

I'll beat you so bad, they'll feel it in the next generation,

(He claims that he'll clobber Kirk so hard in this battle, his descendants will feel the pain. A passing reference to Star Trek: The Next Generation, a show that Kirk does not appear in, as he was only a character in the original television series and in the first seven films. He would not appear again until the 2009 film reboot, which sets up an alternate continuity.)

So bring it on! I'll whip you like a Klingon!

(Columbus brags that he'll subdue Kirk as Kirk subdued many Klingon foes in his time. The Klingons are a dark-skinned warrior race noted for their prominent brow ridges, fierce fighting ability, and outlandish tales of conquest. Their faith even centers on the art of war. In the battle, "Klingon" happens to be written in the fictional Klingon language.)

My rhymes will burrow in your ears like the Wrath of Khan!

(This is a reference to Star Trek II: The Wrath of Khan. Khan Noonien Singh was an enhanced human who could manipulate minds through the use of small eels that would burrow into his victims' ears, as he did to control two members of the USS Reliant: former Enterprise crew member Pavel Chekov and the Reliant's captain. Khan does this to lure out Kirk, whom he blames for the death of his wife and child. Columbus' rhyming skills, he says, are just as fierce as Khan's method of torture.)

I've got a neck chop for Spock! I'll put my sword through Sulu!

(Columbus will mess up Kirk's crew: Spock, who is known for his Vulcan neck pinch, and Sulu, who is very skilled at swordplay. Thus, it would be powerful of him to beat them with their own best fighting skills.)

Check into a Priceline hotel and watch your fat ass on Hulu!

(Columbus says that he will go to a cheap hotel that he found on Priceline.com, a website where travelers can negotiate for the lowest prices on flights and hotel stays, and watch Kirk's embarrassing performance on Hulu, an American website where you can watch shows such as Star Trek. Priceline and Hulu were both famously stumped by William Shatner, who played Kirk for all but a few episodes of the original series of Star Trek. It also disses Shatner, since he gained weight in his later career.)

(James Tiberius Kirk, Captain Kirk's full name, is the captain of the USS Enterprise, making him an enterprising captain. His speech pattern on the show is also used in the rap battle, in which he makes lapses as he talks.)

(Kirk was born in Riverside, Iowa, located on planet Earth.)

I…hear you call yourself an explorer, but I'm just not having it.

(Columbus is an explorer, but Kirk is not convinced of this in the least, and starts mocking him.)

You…discovered a new world that was already inhabited!

(Columbus discovered lands in the Earth's western hemisphere that came to be called the "New World" in opposition to the "Old World" of Europe, Asia, and Africa. What he didn't expect was that this "world" already had native peoples living on it. Kirk also references the Starfleet "Captain's Oath" used in the franchise: "to explore strange new worlds, to seek out new life and new civilizations…".)

(Columbus' voyages usually result in him getting lost, such as when he found the Americas but was supposed to find a faster route to the East Indies. Kirk finishes the pun on the Captain's Oath, which normally ended with, "…to boldly go where no one has gone before.")

(India and the East Indies were Columbus's actual destinations when he stumbled upon the Americas. Kirk taunts him for being unable to do so.)

(Italians stereotypically eat spaghetti and have extensive spice racks. Columbus was supposed to be seeking exotic spices from the East Indies according to some history sources, and he failed even as he discovered lands in the Caribbean. Kirk asks how his spice rack is doing as a joke to remind him that he never acquired the spices he was supposed to get.)

I'll be…chilling in my spaceship. Have fun canoeing.

(While Columbus' fleet will be struggling against storms and other hazards with their wooden ships which resemble canoes, Kirk will be relaxing in his futuristic state-of-the-art spaceship.)

You know, rapping against you, it's not even fun.

(Rapping against Kirk is boring to Columbus, possibly due to his broken and weird speech patterns, or that Kirk's not good at rapping and takes the joy out of it. During this line and the one that follows, Columbus is mimicking the way Kirk delivers his speech.)

(Columbus thinks Kirk's raps are so weak, it's like his brain is on stun, the weakest setting for a Star Trek phaser, designed to just incapacitate the target, doing no real harm.)

I am the fabric of history! You are a fictional stain!

(Columbus is a well-known historical figure, having paved the road of history, whereas Kirk is only fictional roadkill on the highway of history. Stains are not desirable to have on fabric, so Columbus says Kirk is just a nuisance to him.)

I'll stick a flag up your ass and claim you for Spain!

(Even though Christopher is Italian, he sailed to the West Indies in the Americas to claim the land as Spain's territory. Voyagers normally put a flag on land that was sailed to and claimed it for their representing country, and he'll do the same with Kirk.)

(Kirk asks Spock to transport him to 1492, the year Columbus discovered America. He says he wants to beat him down personally as if it's his mission.)

(Isabella I was the queen of Spain who, with husband Fernando II, gave Columbus support for his journeys. Kirk also recorded noteworthy mission events and observations in a captain's log, which is essentially a voice journal used throughout the Star Trek canon. In this context, "captain's log" means Kirk's penis and that he will seduce Isabella by demonstrating how he is more of an explorer than Columbus.)

It's…Kobayashi for you. There's no way you can win.

(The Kobayashi Maru is a simulation given at the Starfleet Academy featuring a no-win situation in which the test taker is caught in hostile Klingon territory and must either leave the Kobayashi Maru vessel stranded beyond the enemy's border (in which case the crew dies) or attempt rescue and risk war (in which case the test taker is likely to die along with his crew and the vessel's crew). Likewise, Kirk says Columbus has no chance of winning. Kirk is also the only one to ever beat the simulation, having hacked it in order to give himself the win.)

When your…weak crew sees me approaching, they'll be like, "Dammit, it's Jim!"

(Compared to Kirk's advanced weapons, Columbus' crew wouldn't be able to stand a chance, and they'll run in fear. Dr. Leonard "Bones" McCoy, Kirk's close friend and chief medical officer on the Enterprise, often said, "Dammit Jim! I'm a DOCTOR, not a _____!" on the show.)

Now…take your genocidal ass off of my bridge.

("Get off of my bridge" is a quote from Star Trek. If a captain says this, it basically means you had better run away while you still can. A person or group is "genocidal" when it insists upon the killing of an entire race or culture, often by reason of hatred and with malice. Since the Spanish murdered a lot of Native Americans and nearly wiped out their culture under Columbus' watch as governor, he himself gets blamed. Kirk wants Columbus to step away from him as this battle ends.)

Keep my crew's name out of your mouth or you'll get hurt.

(Columbus warns Kirk not to insult his ship's crew or he'll pay the consequences.)

I'll Leif Ericson your ass and predate your best work.

(Leif Ericson was an Icelandic explorer famous for having discovered North America almost five hundred years before Columbus. Columbus uses his own weakness in his argument to further weaken Kirk's argument, bragging that Columbus was sailing and discovering new worlds almost five hundred years before Star Trek was conceived, downplaying it as nothing new and done before hundreds of years ago.)

Yeoman Rand and Marlena gave you too many favors.

(Janice Rand was a yeoman on the USS Enterprise, and Marlena Moreau was Kirk's "captain's woman" in a parallel universe. Columbus implies that Kirk has had a bit too many relations with these two.)

Bones diagnosed, you got sores on your phaser!

(Bones is the nickname of Dr. Leonard McCoy, chief medical officer on the USS Enterprise. Columbus implies that McCoy investigated a discomfort Kirk was feeling, concluding that it was due to sores on his "phaser," (euphemism for "penis") likely due to the implied relations with Rand and Moreau touched upon in the previous line.)

Retrieved from "https://epicrapbattlesofhistory.fandom.com/wiki/Christopher_Columbus_vs_Captain_Kirk/Rap_Meanings?oldid=1455378"
Community content is available under CC-BY-SA unless otherwise noted.