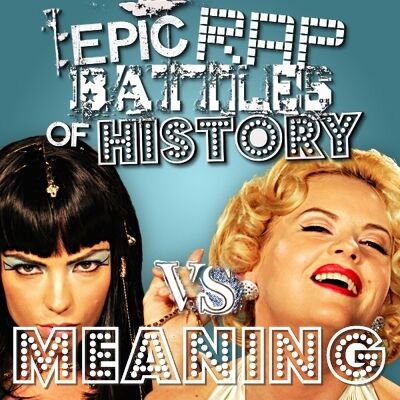 Whose rap flow's the dopest? Marilyn Monroe's is!

(Monroe thinks that her rapping is the best, because when a rap "flows dope", the rapper delivers well and has good technique. It could also refer to how Monroe died from a drug overdose, as taking drugs is also known as "doping".)

(She's setting up to take down Cleopatra, a pharaoh. The Moses reference here is that Pharaoh had been opposed by Moses prior to the Hebrew Exodus.)

You could never kick my ass, so kiss my clitoris!

(Monroe hopes to humiliate Cleopatra by saying she could never beat her, and telling her she should buzz off. "Kiss my clitoris" is essentially the female version of "suck my dick", as the clitoris is the most prominent part of her vulva, likened to a man's penis.)

This ugly hag and KassemG got matching noses!

(Cleopatra's nose was revered in the ancient world as part of her legendary beauty, but Monroe thinks it makes her resemble an ugly old witch. As Mediterranean people tend to have large noses, Cleopatra's nose might have things in common with KassemG's.)

(Oh no!) You better hold more than your skirt, miss, please.

(As if to say, "Excuse me?", Cleopatra orders Monroe to hold her tongue as she pulls rank on Monroe. When a ruler like Cleopatra gives an order, her subjects had best follow it or otherwise risk the consequences of their insolence. Cleopatra refers to the famous scene from one of Monroe's films, The Seven Year Itch: while waiting on a New York subway platform, a draft from an oncoming train blows through a vent and up her character's skirt, forcing her to hold it and thereby maintaining some decency. She also did the same thing in the last half of her first verse.)

I'm the Queen of the Nile, so just bow down to me!

(Historians and filmmakers alike call Cleopatra the "Queen of the Nile" since the overwhelming majority of Egyptians, since the founding of Egypt through the present day, live along the Nile. In ancient times, government authority was enforced by patrol boats rowing up and down the river. She wants Monroe to bow before her, as is custom to a ruler like a pharaoh.)

Plus, you've got so much experience down on your knees.

Married a writer, but I don't even think you can read!

(Cleopatra takes a stab at Monroe, calling her illiterate and a dumb blonde, at the same time referencing Monroe's marriage to The Crucible and Death of a Salesman playwright Arthur Miller. The line could also reference Cleopatra being an accomplished ruler, being able to write and speak fluently in 10 different languages, including Greek, Egyptian, and Latin.)

You'll sleep with any ugly dude who says he likes it hot!

(Monroe supposedly had affairs with homely men, and thus Cleopatra basically calls Monroe a whore. Some Like It Hot was one of Monroe's movies.)

Even Joe DiMaggio took a swing in your batter's box!

(Monroe had an affair with, and later a marriage to the New York Yankees' Hall of Fame centerfielder Joe DiMaggio. This being the case, Cleopatra uses baseball terms to frame Monroe's affair, meaning that she had sex with him, like other men she'd been with.)

I'm a descendant of the gods; don't anger me, trick!

(Pharaohs were considered to be descendants of the Egyptian pantheon and had godlike talents. This being the case, it was considered wise not to upset a Pharaoh since doing so would unleash his ancestor-god's violent wrath against the people. Cleopatra is said to have descended from the goddess Isis as well as Ptolemy, so Monroe had best not cross her, lest all hell breaks loose. "Trick" is slang for a prostitute.)

You'll lose this battle like your bout with barbiturates!

(Monroe killed herself with an overdose of Nembutal, a barbiturate used to induce sleep. Cleopatra says that she will lose the rap battle in the same way she lost her battle against depression and prescription drug addiction.)

I had some ugly boys, but you're forgetting the others:

(Monroe confirms that some of the men she dated were ugly, but she was also with some handsome guys—high-ranking, as well.)

Marlon Brando and the Kennedys, while you fucked your own brothers!

(Actor Marlon Brando, and the iconic Kennedy brothers, John F. Kennedy and Robert F. Kennedy, were a few of Monroe's most notable flings (she even notoriously popped out of a cake to wish JFK a happy birthday). Meanwhile, ancient historians believe that Cleopatra had incestuous affairs with her own brothers, sons, and nephew in order to preserve the pharaonic bloodline, as was customary in her time.)

You think you're so chic up in your fancy palace.

(Pharaohs often lived in elaborate palaces, and Cleopatra was no exception. Monroe thinks she is a bit too proud of herself.)

(According to sources, Cleopatra had affairs with Marc Antony and Julius Caesar, precipitating the falls of both Rome and Egypt in ancient times. To "get low on somebody" means to have sex with them. Interestingly, Marlon Brando, who Monroe had previously boasted about having relations with, portrayed Marc Antony in the 1953 film rendition of William Shakespeare's play Julius Caesar. Additionally, the spelling of low as Lo could reference singer Jennifer Lopez or J-Lo's ex husband also called Marc Anthony. "Tossing" is something you do to a salad, such as a Caesar's salad, to mix the greens, while "tossing one's salad" refers to performing oral sex on someone's anus. Basically, Monroe accuses Cleopatra of acting high and mighty while she would still lower herself to perform degrading sex acts on other world leaders.)

You wear too much eyeliner for anyone to adore you.

(In ancient Egypt, royalty wore a lot of makeup as proof of social status, but Monroe is calling this gaudy and over-the-top, even for her.)

You might as well be working the door at Sephora!

(A woman with as much makeup nowadays might be working for the Sephora chain of beauty shops, which in North America are most often found inside corporate partner J. C. Penney's stores.)

I got an ass that won't quit! You had an asp and got bit, on the tit!

(For her time, Monroe had a shapely derrière. Asp is the name for a venomous snake, usually an Egyptian cobra. Cleopatra reportedly committed suicide by letting a cobra bite her on the breast shortly after Marc Antony lost the Battle of Actium to Octavian, and he committed suicide as well.)

Somebody wrap this bitch back up in a carpet!

(Cleopatra was snuck into the Alexandrian palace wrapped in a carpet. Here, Monroe wants somebody to get Cleopatra off stage by wrapping her back up into the carpet again.)

You've still got no children after your third marriage!

(Even after all three of her marriages, Monroe was childless.)

You've lost so many babies, we should call you Miss Carriage!

(With all of the affairs that Monroe supposedly had, it's not surprising that she was frequently pregnant. Unfortunately for her, all of those pregnancies were miscarriages, meaning that the children she was carrying died while in the womb. Cleopatra makes a play on the type of title given to someone at a beauty pageant, like Miss Congeniality, and saying Monroe should be titled Miss Carriage, play on miscarriage.)

You got an hourglass figure, but that's about it!

(An hourglass figure is when a woman has wide hips and large breasts with a small waist. Cleopatra says that Monroe's attractive figure is her only asset.)

A candle in the wind that can't act for shit!

(Elton John was a huge fan of Monroe, drawing his famous song "Candle in the Wind" from her life and work in 1973. Despite this, Cleopatra calls Monroe out as a bad actress.)

Translate this into hieroglyphs:

(Ancient Egypt is well-known for its use of hieroglyphs—drawings that represent words and phrases based on position. Cleopatra almost certainly understood them, so Monroe tells her to write what she's about to dish in, since Cleopatra could speak six languages, despite English not being one.)

Your sandy vagina has a seven-year itch!

(The hieroglyphs shown are a desert, a downwards pointing triangle and a crab. Judging by the glyphs, Monroe thinks Cleopatra has an STD, specifically the crab louse parasites, and the term "sandy" also references Cleopatra coming from Egypt, where it is mostly sand and desert. Monroe pulls up another reference to The Seven Year Itch.)

My best friends are diamonds! You can't beat me! Quit trippin'.

(Monroe sang "Diamonds Are A Girl's Best Friend"; this is a play off that title. She is claiming that diamonds are her best friends, and diamonds are known for being the hardest mineral on earth; therefore, Monroe's friends are unbreakable like them, as well as wealthy, since diamonds are a rare and commonly affluent substance. In rap culture, if someone is "tripping", they are assumed to be talking nonsense, as if they are high on drugs (cf. "acid trip"). Based on this, Monroe says Cleopatra is crazy for thinking she can defeat her.)

Step off and walk your ass home like an Egyptian!

(Monroe thinks Cleopatra should just walk away, with a reference to The Bangles' 1986 cult classic "Walk Like an Egyptian". This is also a likely reference to the fact that Cleopatra descended from a Greek bloodline and hence was not truly Egyptian; thus the line could be interpreted as Monroe telling her opponent to act as an Egyptian would.)

Retrieved from "https://epicrapbattlesofhistory.fandom.com/wiki/Cleopatra_vs_Marilyn_Monroe/Rap_Meanings?oldid=1491437"
Community content is available under CC-BY-SA unless otherwise noted.