Clyde Barrow, alongside Bonnie Parker, battled Romeo & Juliet as a part of Bonnie & Clyde in Romeo and Juliet vs Bonnie and Clyde. He also appeared in Dis Raps For Hire - Season 2 Episode 10: Brandon as a cameo. He was portrayed by EpicLLOYD on both occasions.

Clyde Chestnut Barrow, also known as Clyde Champion Barrow, was born on March 24th, 1909, in Ellis County, Texas. Known as half of the notorious Bonnie and Clyde, he became one of America's most famous outlaws.

Under the influence of his older brother, Buck, Clyde began a life of crime at an early age. What began as petty thievery, turned into stealing cars and then escalated to armed robbery. By late 1929, at the age of 20, Clyde was a fugitive around the law, wanted for several crimes inside and around the Dallas area.

In January 1930, Clyde met a 19-year-old waitress named Bonnie Parker. After spending all their time together during the following two weeks, their budding romance was interrupted when Clyde was arrested and convicted of five counts of auto theft. While in prison, he beat to death an inmate who had repeatedly sexually assaulted him.

Not long after he made parole, Clyde was reunited with Bonnie, and together embarked on a crime spree, robbing banks and small businesses. Their criminal activity ultimately spanned across Texas, Oklahoma, New Mexico, and Missouri, where they killed at least 13 people, including three police officers, and escaped from several police ambushes.

At the age of 25, after four years of committing crimes as a key member of the Barrow Gang, Clyde died alongside Bonnie in Gibsland, Louisiana, at the hands of the police in a hail of bullets, on May 23rd, 1934.

[Note: Clyde is in brown, while Bonnie is in regular text. Both members of the couple rapping at the same time is italicized.]

It's kinda sad, though, really, so young, to have just died. 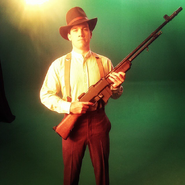 A picture of Clyde posted on the official ERB Instagram account
Add a photo to this gallery
Retrieved from "https://epicrapbattlesofhistory.fandom.com/wiki/Clyde_Barrow?oldid=1450618"
Community content is available under CC-BY-SA unless otherwise noted.