Criss Angel made a cameo appearance in David Copperfield vs Harry Houdini. He was portrayed by Dante Cimadamore and voiced by EpicLLOYD.

Criss Angel was born on December 19th, 1967, under the name Christopher Nicholas Sarantakos, in East Meadow, New York. He is a magician and television personality known for his grand illusions and rising popularity which eventually earned him the shows Mindfreak and BeLIEve.

Angel is the holder of several world records that involved escape tricks. He has won the International Magician Society's Magician of the Year award in 2001, 2004, 2005, 2007, and 2008, in addition to its "Magician of the Decade" title in 2009 and "Magician of the Century" title in 2010. He was the 22nd recipient of the Louie Award for outstanding achievement in the art of magic. Angel was one of the inaugural nominees for the Harry Houdini Award, awarded by the Harry Houdini Museum, making him the youngest magician to ever be inducted into the International Magician Society's Magic Hall of Fame. He is also the only man to have won the Merlin Magician of the Year award on two occasions, in 2001 and 2004. In 2011, he was awarded the World Magic Legacy Awards' Living Legend award.

Angel appeared at the end of Harry Houdini's second verse, asking "Did somebody say Angel?" Houdini answered "No," to which he replied "Oh…" 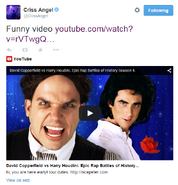