Dane Cook made a cameo appearance in Zeus vs Thor. He was portrayed by a Lego Minifigure.

Dane Jeffrey Cook was born on March 18th, 1972, in Cambridge, Massachusetts. He is a stand-up comedian, film actor, director, and writer, known for his controversial sense of humor. Cook has released several comedy albums, including Harmful If Swallowed, Retaliation, Vicious Circle, Rough Around the Edges: Live From Madison Square Garden, and ISolated INcident. After the success of his sophomore album, he continued his active career as a comedian and transitioned into film, starring in Employee of the Month, Mr. Brooks, Good Luck Chuck, My Best Friend's Girl, and many others.

When Zeus said, "I'm like Medusa: I stone a mother fucker if he looks at me wrong!", Cook accidentally looked into Medusa's eyes and got turned into stone. 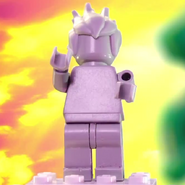