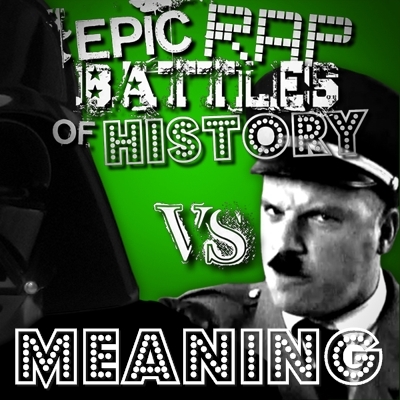 (Hitler begins the battle by introducing himself. The Third Reich was the official name for the Nazi Regime, which Hitler infamously commanded.)

(Hitler was also a very powerful and persuasive orator able to give compelling speeches. Here, however, he refers to his rapping.)

(Vader's costume includes a dark cape and boots. Hitler says this mockingly, suggesting that Vader is not intimidating to him.)

(The most iconic part of Vader's costume is his helmet, which covers up his face that was burnt when he battled Obi-Wan Kenobi on the planet Mustafar. George Lucas, the creator of Star Wars, also claims that his helmet is based from a Nazi helmet, as Nazis were the scariest thing that Lucas could think of.)

("The Force" is the name of the power in the Star Wars saga that governs and surrounds all living things. Adepts like Vader can manipulate Force energies to move objects in their surroundings. Hitler is considered one of the most evil leaders in world history, so he says he's more evil than Vader because he himself was a force of destruction.)

Even went back in time and turned you whack in the prequel!

(Anakin Skywalker, Vader's character in the Star Wars prequel trilogy, was considered to be insane and to have horrible dialogue. Hitler says that he was the one who did this after traveling back to Vader's era.)

(This may be referencing a line from Star Wars Episode VI: Return of the Jedi where Vader is called "more machine than man". He could also be referring to how Vader is a fictional villain or how he wanted to execute disabled people, a group that Vader would fall into on account of his life-support systems.)

(Vader was parodied in the movie Spaceballs, along with the rest of the Star Wars characters and movies. His character's name was Dark Helmet, who was played by Rick Moranis, a Jewish actor. Hitler's regime was infamous for the persecution of Jews; despite this, however, Hitler still says he likes this version of Vader better.)

You can't rhyme against the dark side of the Force. Why even bother?

(Vader joined the dark side of the Force, which is used by the Sith. He says that Hitler's rapping can't compare to Vader's, so he shouldn't even try.)

So many dudes been with your mom, who even knows if I'm your father?

(This is an allusion to Vader's famous line to Luke Skywalker, "No, I am your father." He also calls Hitler's mother a whore (as well as saying he may have been with her), a heavy insult as Hitler looked up to his mother.)

You're a pissed off little prick with a Napoleon dick.

(Vader says that Hitler is just angry and annoying. Napoleon Bonaparte, a French dictator who was similar to Hitler and also took over continental Europe, was [falsely] considered to be smaller than average size, so he says that Hitler has a small dick. It is also said that Napoleon had only one testicle, and Hitler, along with other Nazi generals, was mocked by a British anti-Nazism song named Hitler Has Only Got One Ball, as well as being rumored to have one of his testicles lost during World War I.)

You call that a mustache? I call that Dirty Sanchez on your lip.

(Hitler was known for having a very thin mustache. Dirty Sanchez is a sexual act where one partner smears fecal matter on the other's upper lip, so Vader says that it looks as if someone put shit on Hitler's lip.)

You bitch, let me remind you who you're messing with.

(Vader believes that he is the greater ruthless leader in the battle and tells Hitler what he's getting himself into.)

Everything that you did, I'm the motherfucker who invented it.

(Star Wars supposedly took place before Hitler's time since the films start with the statement, "A long time ago in a galaxy far far away…", which is always seen in the opening crawl of the movies. Vader says that during this time, he invented all the villainous acts that Hitler committed.)

I'm the original Dark Lord. You're like the sorcerer's apprentice.

(Vader was the "first" villain to be called the Dark Lord. Apprentices often study to be lords, like the Dark Lord referenced in the line. It also references The Sorcerer's Apprentice, a movement from Disney's Fantasia in which Mickey Mouse plays a clumsy, yet curious servant-boy whose imagination runs amok when his warlock master leaves the castle. Vader is calling Hitler him an incompetent klutz (coincidentally, the Star Wars saga would later be bought by Disney.) Possibly also a reference to a quote from Yoda in Star Wars Episode I: The Phantom Menace, in which he says that there are always two Siths: a master and an apprentice. Vader calls Hitler the apprentice and therefore claims to be the superior of the two. It may also be referencing the Dark Lord in the Harry Potter franchise, Lord Voldemort. Vader says that he is a true Dark Lord whilst Hitler is someone young and still learning how to be evil.)

My Stormtroopers make yours look like someone took a piece of shit and cloned it.

(Both Vader and Hitler had followers named Stormtroopers. Vader says his army makes Hitler's look like cloned shit since they wore brown suits, so they looked like feces when compared to Vader's Stormtroopers, who wore white armor. It may also be a reference to Star Wars Episode II: Attack of the Clones and Star Wars: The Clone Wars, in which the Republic had started an army of clones. In Star Wars Episode III: Revenge of the Sith, these clones turn on the Republic after being given Order 66 by the Sith Lord Darth Sidious. Because of this, it's often falsely assumed that the Stormtroopers that the Empire uses are these clones as well.)

You stink, Vader. Your style smells something sour.

(Hitler thinks Vader is terrible at rapping, so his style "stinks".)

You need to wash up, dawg. Here, step in my shower!

(One of the Third Reich's most infamous instruments of death was the "gas shower" that was used to trick prisoners, most of which included Jews, into thinking they were getting a legitimate shower, but were gassed instead. Hitler implies that Vader should step in the shower to wash his bad rapping, but instead, Hitler will use the shower to gas him to death.)

(Hitler gave persuasive speeches that turned people against each other to ultimately align with him. He says that he would even be able to convince Vader's army to turn against him.)

What's your lightsaber versus a clan of all your white neighbors?

(A lightsaber is a weapon used by Star Wars characters. Vader's Stormtroopers' outfits are predominantly white. Hitler wanted a world of all white people, and Vader's suit is all black, and he was voiced by a man who was black. He says that not even his lightsaber will be able to defeat his own army.)

(Vader inhales from his respirator, as that is his way of breathing. Since he is considered to be more machine than man, he has "robot balls", and he's telling Hitler to suck them. As he does this, he uses the Force to choke hold Hitler and brings him over to his side.)

Now take a step back and let me freeze yours off!

(Vader pushes Hitler back and freezes him, making a reference to how he froze Han Solo in The Empire Strikes Back.)

A little carbonite bath for your goose stepping ass.

(Carbonite is material from Star Wars that Vader uses to freeze a person in, and they can still survive when they are thawed out. Hitler and the Nazis walked in a particular style called "goose stepping", where the knees never bend and the legs are lifted up very high.)

We'll call my homeboy in Israel. See who got the last laugh!

(Vader is calling his friend stationed in Israel, a Stormtrooper. Israel is known for being the Holy Land for Jews and containing them during World War II, and it possibly references a famous Israelite Nazi hunter, so Vader is calling in reinforcements and referencing that the mere existence of Israel signifies that Hitler failed at his goal of wiping out Jews.)

(These lines are what developed into the lines, "*heavy breathing* Suck my robot balls! Now take a step back and let me freeze yours off!" In this case, Vader calls Hitler "Assdolf Shitler," making a pun with his name and the insults "ass" and "shit.")

You son of a Rodian

(Vader replaces the term "bitch" in the derogatory phrase "you son of a bitch" with "Rodian," which is a species in the Star Wars universe that is green-skinned and has the general appearance of a reptile, calling Hitler's mother an ugly creature.)

Next battle: Hitler vs Vader 2

Retrieved from "https://epicrapbattlesofhistory.fandom.com/wiki/Darth_Vader_vs_Hitler/Rap_Meanings?oldid=1463036"
Community content is available under CC-BY-SA unless otherwise noted.