David Copperfield was born on September 16th, 1956, under the name David Seth Kotkin, in Metuchen, New Jersey. He is an illusionist known as one of the world's most famous magicians and wealthiest entertainers. Copperfield's most popular illusions include walking through the Great Wall of China, making the Statue of Liberty disappear and reappear, and escaping from a flaming raft over Niagara Falls. Highlights in his career include winning twenty-one Emmy Awards, setting eleven Guinness World Records, earning a star on the Hollywood Walk of Fame, and more. Additionally, Copperfield was knighted by the French government, becoming the first magician to receive the Chevalier of Arts and Letters. He has grossed over $4 billion in his career, the most out of any solo entertainer in the world.

Now, you're like a Chinese wall to me. Bitch, I'll walk right through you.

This ain't the magic that you're used to.

The foot of Lady Liberty is stomping on your elephant.

You should stick to what you're good at and lock them lips!

(Ooh!) Here's a tidbit that might drive you nuts:

I bought half your shit, and I keep it locked up!

Got the slim fingers that were built for sleights.

You're a chunky stuntman dressed in tights!

You talk shit about your hero; that ain't right,

But you can look up to me now. I know you like heights!

See what they'd be watching if it wasn't for me?

I remind the world that magic is supposed to make you happy!

While you waste time proving everybody wrong,

I'm backstage getting my supermodel groove on!

You should relax. Take a private trip

Deep-fried sucker with a side of punch! 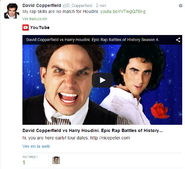 Another response from Copperfield to Nice Peter and EpicLLOYD on Twitter 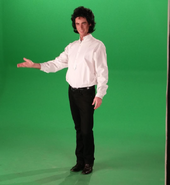 David Copperfield Behind the Scenes
Add a photo to this gallery

Retrieved from "https://epicrapbattlesofhistory.fandom.com/wiki/David_Copperfield?oldid=1450627"
Community content is available under CC-BY-SA unless otherwise noted.