Deadpool battled Boba Fett in Deadpool vs Boba Fett. He was portrayed by Robert Hoffman and voiced by EpicLLOYD.

Deadpool, real name Wade Wilson, is a Marvel Comics antihero primarily associated with the X-Men franchise and known for his outrageous personality and deviant sense of humor which frequently involves metafictional references such as addressing the real-life audience, as well as his ability to rapidly recover from virtually any injury up to and including the likes of decapitation, effectively making him unkillable. He was designed by artist Rob Liefeld as an incidental antagonist for an issue of the New Mutants series, but quickly became inordinately popular and underwent drastic expansions to his character and prominence. Deadpool's appearance was inspired by that of DC Comics supervillain Slade "Deathstroke" Wilson, and his nearly identical real name was written in by an editor in light of this. The two also share similar abilities as well as mercenary occupations, and Deadpool has sometimes been described as a "parody" of Deathstroke, despite his defining personality and humor as established subsequent to his conception decidedly not being derived from his counterpart.

Within the Marvel universe, Wade Winston Wilson was a Canadian war veteran who was diagnosed with terminal cancer. He retired from the army and desperately sought a cure by undergoing experimentation as part of the Canadian "Weapon X" program which gave Wolverine his claws. While there, Wilson was imbued with extreme healing abilities derived from those of Wolverine, making him the least likely to die of all the subjects, thus the king of the "dead pool", where the subjects would bet on who would die next. His healing factor worked with his cancer so that it quickly spread over his body, leaving him in constant pain and his body heavily scarred. As a side-effect, he became insane which would manifest as metafictional awareness, constantly breaking the fourth wall with his yellow text boxes in which other personalities of his speak.

Becoming an unkillable mercenary, Deadpool set out in various endeavors wherein he fought the likes of Wolverine, Spider-Man, and the Hulk. He eventually joined forces with time-traveling X-Men affiliate Cable, and became part of the X-Men splinter team, known as X-Force. He is currently a member of Captain America's ex-Avengers team in the Uncanny Avengers series.

He was portrayed by Ryan Reynolds in the X-Men film franchise starting with X-Men Origins: Wolverine in 2009, where Reynolds played a more-or-less accurate pre-transformation Wade Wilson, only to be replaced in the film's climax by a "Deadpool" that infamously bore almost no resemblance to the iconic character, notably not even speaking. This was later rectified by 2016's Deadpool and its 2018 sequel, where Reynolds portrays a traditional iteration of Deadpool which was extremely well-received.

I'm one of a kind; you're a xerox of your papa!

Deadpool dressed as a carny announcer

Deadpool in his comic book

Deadpool before he combats a group of street toughs

Deadpool shooting a street tough in the head 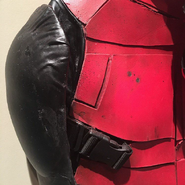