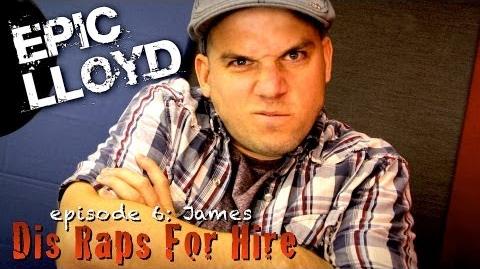 Dis Raps for Hire - Episode 6 is the sixth installment of Dis Raps For Hire and the sixth episode of Season 1. In this episode, EpicLLOYD helps Simon with his twin brother, James, who lives with him and doesn't try to find himself a job to help support him and Simon. It was released on July 25th, 2012.

I grind Brit dead beats to dead meat for pissin' around!

It's Mr. Lloyd, chap, and that's my friggin' background!

The sixth chapter of Dis Raps For Hire!

I'm here to dis the fuck out leech punks 'cause they bloody suck! (Yup!)

You wanna free-load? Then you can latch onto my nuts!

How do you live with yourself, Jim? Oh yeah, you don't 'cause you're broke! (Nope!)

And you sap rent, taxes, and bills from your bro! (Ohhh!)

Well, it's over now! EpicLLOYD's of London come to town! (What!)

Listen to your brother: Simon says, "Get the fuck up!"

Calls himself Jim 'cause he's too lazy for James! (James!)

Not working the bank, but you need to make some change, man!

You coward! Go out and earn some of your own cash to play around with!

I'm not on massive wages, but I'll give you some massive poundage!

And the worst part about it, for Simon, is that you're his twin!

Holy shit, man! Where to begin?

You even leeched his goddamn DNA off of him!

But it's okay; you must be fraternal. That's easy to see, though.

And I've heard the talk: ten years of looking hard for jobs,

But the last time you got one, Tony Blair was in office!

And it's not the money, man! Most folks are happy to help!

Showing thanks by sitting around is how the disrespect is felt!

This is a wake-up call from across the pond! I'm dropping bombs!

So thick diss had to stick an extra 's' on!

So what's your problem, Jim? Your brother is such a great guy!

Won't say goodbye, even though the bloke can barely scrape by!

And you won't even try to find a job, you sloth asshole!

At least when ho's go broke, they learn to work the pole!

So fight, Simon! And if he moans he's got nowhere else to go,

Tell him to try hell! Maybe he can crash on they floor!

Oh, don't act that depressed, man! Just make a move on this mooch,

Or this douche will continue to use you and your flat 'til you do!

But whatever you choose, you better get move on it soon,

'Cause when he hears this, living together is gonna get real awkward for you.

Dis Raps For Hire Ep. 6 - Behind the Scenes
Add a photo to this gallery
Retrieved from "https://epicrapbattlesofhistory.fandom.com/wiki/Dis_Raps_For_Hire_-_Episode_6?oldid=1485159"
Community content is available under CC-BY-SA unless otherwise noted.