Dis Raps for Hire - Episode 8 is the eighth installment of Dis Raps For Hire and the eighth episode of Season 1. In this episode, EpicLLOYD helps mville23113 with his crazy boss Daniel. It was released on October 15th, 2012.

Look, someone asked for help writing a resignation letter. I'm not sure if it's the best idea given the current economy, but you know, whatever. Ahem.

I sling hot cakes and runny eggs at IHOP to pay bills,

But I'm disgusted! I wrote this for justice,

For suffering lost tips, and being made to look suckish!

First things first: I quit! You can take this job and shove it up your ass!

I don't give a shit if you're pissed! You yell at me again and some plates is gonna get smashed!

It's obvious you drink too much,

But don't take your frustrations out on us!

You suck, boss! And your whole pancake house sees!

Scream at me in front of customers, I'mma diss you internationally!

We got an idiot restaurant manager here who can't figure

That cutting other people down doesn't make 'em no bigger!

You're just pissed that you're on bail and your little feelings got hurt,

'Cause it was five grand to spring you, and that's like a year's worth of work!

This is not hip-hop; this is ass whip-hop!

I buck wild, flip out like a gymnastics bus!

Moosh you up 'til you're soft like a smoothie,

Then drizzle you atop my Rooty Tooty Fresh and Fruity!

You're getting waxed, Daniel-san! You catching my point?

You couldn't handle your commute, let alone a breakfast joint!

Man, four DUI's? How many times does it take?

Stay off the road, you drunk asshole! Take the train!

Awwww! Fuck this! Suck a dick, you dumb bitch!

Maybe this is clearer: how's your middle finglish?!

So give that to your boss. You're definitely not gonna have a job afterwards, but let me just say…

Yo ville, I'm on your back! I hope my quit rap helps!

Now let me dis this little power-trippin' dick myself!

I want my hand to meet your mouth 'cause they both talk smack!

Your communication skills are horrible!

I couldn't figure out what three things you were talking about, and I'm on Mission IMPROVable! (Look it up!)

Your whole life is in the weeds!

In a four top world with brains only meant for parties of three,

And now you're the one who's left looking suckish,

So crawl your ass back to your tiny rat nest of an office!

I 86 a crazy boss in Dis Raps eight

For talking shit on the shift when it's just freaking pancakes! 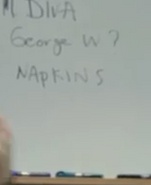 ERB hint appearing in the DRFH

Frozen Hitler seen behind Lloyd
Add a photo to this gallery

Dis Raps For Hire - Ep. 8 - Behind the Scenes
Add a photo to this gallery
Retrieved from "https://epicrapbattlesofhistory.fandom.com/wiki/Dis_Raps_For_Hire_-_Episode_8?oldid=1457389"
Community content is available under CC-BY-SA unless otherwise noted.