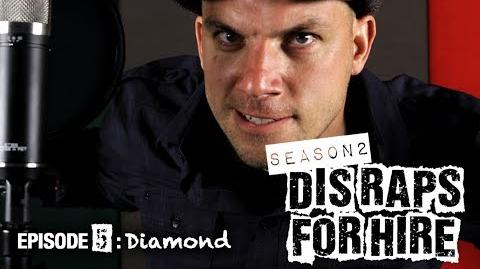 Dis Raps For Hire - Season 2 Episode 5: Diamond is the fifteenth installment of Dis Raps For Hire and the fifth episode of Season 2. In this episode, EpicLLOYD insults "Diamond" for picking on DiggyDiggyBros' sister who is afflicted with Rett syndrome. It was released on June 2nd, 2014.

Now this douchebag Diamond's gone and woke a sleeping giant!

My target is acquired, and I'm starting up a riot!

Never in my life I heard of something so cold:

An asshole taking shots at a seven-year-old!

Now I'm hotter than the Devil, and you're never gonna forgive me!

You're facing EpicLLOYD, and I'm bringing Hell with me!

"Diamond", don't get bitter and pick on dude's sister

'Cause you got named after the discount stripper!

You're as macho as my man, Tim Gunn!

Keep your names to yourself, or get your brain bashed to hell!

They'll have to ask Diamond's teachers to hold me back!

'Cause you got no idea what this girl's gotta do,

What she gotta go through just to try and walk to school!

You wanna stand there and make jokes?

This girl's tougher than you and only seven years old!

She got a Rett Syndrome in her X chromosome!

Too complex a problem to explain on a microphone!

So if you wanna talk Rett, let me give you a Link!

Read up, ya dumb fuck, then come tell me what you think!

But you should try to pass class a little faster, guy!

You should not be able to drive yourself to Junior High!

At this rate, you'll be twenty-four before you graduate!

So DiggyDiggyBro, if you dig this video,

Put your fist in the air and pump it like Arsenio!

Go home and bump it with your sis and say I say hello,

And put Diamond in the ground like the heroin joke!

Retrieved from "https://epicrapbattlesofhistory.fandom.com/wiki/Dis_Raps_For_Hire_-_Season_2_Episode_5:_Diamond?oldid=1485148"
Community content is available under CC-BY-SA unless otherwise noted.