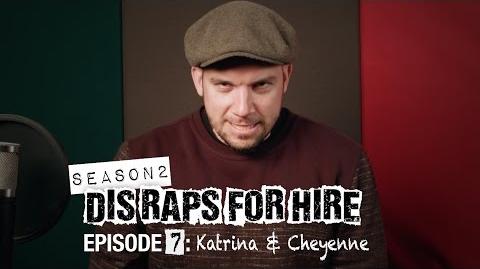 Dis Raps For Hire - Season 2 Episode 7: Katrina & Cheyenne is the seventeenth installment of Dis Raps For Hire and the seventh episode of Season 2. In this episode, EpicLLOYD insults Katrina and Cheyenne for tormenting burnflame12's girlfriend, Jillian. It was released on April 17th, 2017.

'Bout my girl in the eighth grade.

I be the guy by her side while she cry, by the name of the burnflame!"

She got slapped in the face! Only 3.5 days to graduate!

Laughed at, disgraced by her friends trying to make

I been losing my mind by the scene of the crime!

Pull a couple of stunts, and make me eat 'em for lunch,

And I'm known to be blunt, so I'm not gonna front!

Straight out the blue, but I'm afraid this story only gets worse for you!

I'm gonna curse at you till you feel abused,

And it's all been used just to fuel the views

And my amusement, but I ain't done yet!

Backstabbers who be starting the drama

Better hotfoot outta here like you're in feety pajamas.

Super Saiyan Cheyenne, then when nobody looks,

Strand you alone with Katrina like George W. Bush!

Next time you wanna go and give a slap cam a try,

I'll mastermind a batch of rhymes to snap your mind

Leaving all the little vertebrae in your turning back misaligned!

Been a long time now; bear with me!

The shit stops here 'cause the shit's not fair

To anyone! And you could be next!

Better watch your back! Keep a swiveling head!

Once you're off the hook, dirty looks will spread,

Jillian, you feeling me? These snitches ain't nothing!

Ditchin' bitches who sicken you will always stay on your mind

When you watch it back several times on my Dis Raps-cam Vine!

Retrieved from "https://epicrapbattlesofhistory.fandom.com/wiki/Dis_Raps_For_Hire_-_Season_2_Episode_7:_Katrina_%26_Cheyenne?oldid=1491644"
Community content is available under CC-BY-SA unless otherwise noted.