Dis Raps For Hire - Season 2 Episode 9: Cory is the nineteenth installment of Dis Raps For Hire and the ninth episode of Season 2. In this episode, EpicLLOYD insults Cory for abusing Drew's best friend, Alexis. It was released on March 9th, 2018.

You thought the L was gone, but Talion, I'm hearing you,

And you'll be happy after hearing that your name's been Drew!

But you don't wanna sing this song with your daughter!

I'm on a killing spree, homing in on this all week!

Targeting a pig with control freak on fleek!

Dis rapping the horrible story of Cory, and warning, this gets gory!

I'm unpacking my fists at the back of his throat, and it's gonna be staying rent free!

She do the cooking and the cleaning of this bum's clutter.

But these ain't fairy tales; this ain't bedtime!

You see these type of mother fuckers lately in the headlines!

The weak kind behind the scenes abusing power!

Famous or no names, it's time this bullshit ends!

Alexis walked to the store, but they were out of good boyfriends!

Can't help it but destroy this bitch 'cause, bud, you're an embarrassment!

You got another guy sending money to your girl's kids!

What's that say about you, Captain Video Games?

Don't want her checking Facebook 'cause all your pictures look ashamed,

And they should! No male friends, even if they mailmen!

You fail when you front like you trying keeping her in jail, man!

You frail man, you weak man, you thinking that she cheat when she leave,

But there's just doubt 'cause you be lacking self esteem!

Come on, man! Help Alexis; it's done so easily.

If you want to help her out, just hurry up and leave!

She was only in New York for just a month or two!

Dawg, there's 20 million people there, and she got stuck with you!

Could be doing cool, but now she wished she never moved!

Rotten to the Cory inside the big apple,

But I'm snatching back this friend you grabbed, so suck a dick, you asshole!

Never has anyone caused so much begging for vengeance!

The request has been answered; the sentence ruled for the plaintiff!

He's asking destruction, it's granted, and I'm old fashion with the manners:

Hold the door on Cory's route until this cunt walks the fuck out! 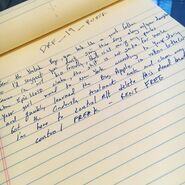 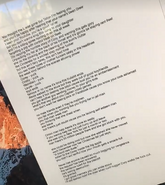 Lyrics draft, as posted on Lloyd's Facebook story
Add a photo to this gallery

Retrieved from "https://epicrapbattlesofhistory.fandom.com/wiki/Dis_Raps_For_Hire_-_Season_2_Episode_9:_Cory?oldid=1476327"
Community content is available under CC-BY-SA unless otherwise noted.