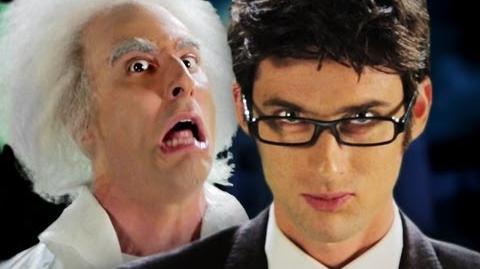 Doc Brown vs Doctor Who is the twenty-fourth installment of Epic Rap Battles of History and the ninth episode of Season 2. It features Back to the Future scientist, Doc Brown, rapping against the eponymous protagonist of his TV series, Doctor Who. The Doctor starts as the Tenth Doctor, then regenerates halfway through the battle into the Fourth Doctor after being fatally shot by a Dalek. It was released on October 29th, 2012.

Nice Peter as the Tenth Doctor

George Watsky as the Fourth Doctor

[Note: The Tenth Doctor is in brown, Doc Brown is in gray, the Fourth Doctor is in maroon, the Dalek is in gold, and Marty McFly is in orange. Additional voices are in italics.]

Doesn't even really matter who.

Who am I even talking to? Oh yes, you!

Actually, it's a lot more like a rug, really. (Oh well.) Never mind.

Great Scott! You're great…not! I spit it hot,

I'm not sure what sort of scientific authority you purport to be,

But I'm a real doctor! Where'd you get your degree?

Despite all your companions, you couldn't be having less sex!

I don't know what's lamer: your fans or your special effects!

You don't get another turn to debate! Time to face your permanent fate!

[The Tenth Doctor regenerates into the Fourth Doctor.]

Nobody calls me chicken!

This is between us, Scarfy! Don't try to out-rhyme me!

You'll find I'm as grimy as any slimy time-limey!

I'll use your port-o-potty time machine as my latrine!

You're not a cat with nine lives. You're a pussy with thirteen!

[The Doctor uses his sonic screwdriver to switch off the battle and go to the end slate.] 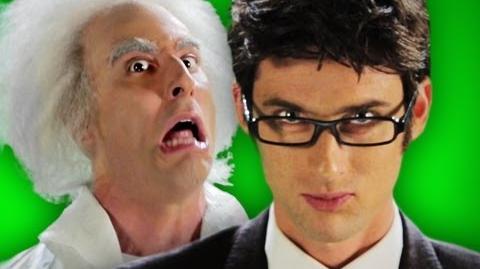 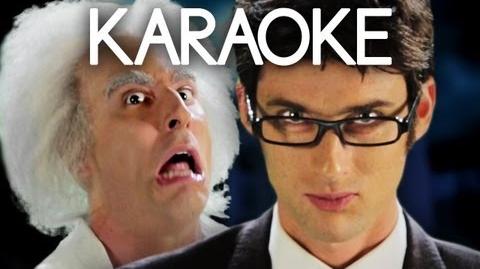 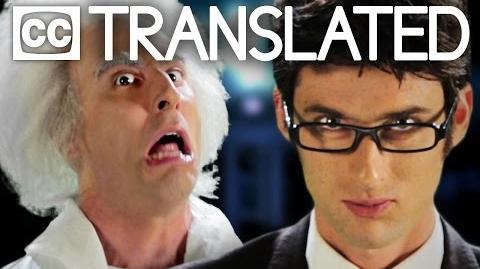