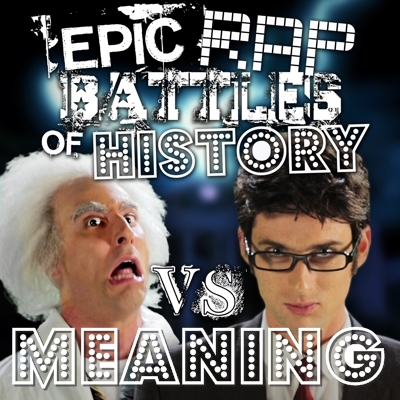 Ooh, actually, if you don't mind, it's just "the Doctor".

(The announcer introduced him as Doctor Who, though he is not known in the show as "Doctor Who". He prefers being called the Doctor, and when normally asked "Doctor who?" he replies, "It's just the Doctor.")

Doesn't even really matter who. Who am I even talking to? Oh yes, you!

(The Doctor's true identity is unknown, so he sets him talking about his name aside for a while. Sometimes the Doctor begins saying things that are off-topic, and he often begins to talk with himself for a moment. When he realizes he wasn't speaking to anyone in particular for a second (since he was only correcting the announcer about his name), he remembers he's rapping against Doc Brown.)

(Doc Brown resembles Albert Einstein without his mustache. His character's appearance was based on Einstein's, so the Doctor says Doc Brown is just a poser of the real life scientist. In the Back to the Future movies, Brown idolized Einstein, as well as naming his dog after him. Coincidentally, Zach Sherwin, who portrays Doc Brown, also portrayed Einstein in Albert Einstein vs Stephen Hawking.)

(The Doctor is known for wearing rather fancy and classy outfits and suits as he travels through time. Brown, on the other hand, isn't really fashionable, looking somewhat unkempt in an ordinary lab coat and messy hair when he time-travels.)

(The Doctor has saved the Earth countless times, while Doc Brown spends most of his time messing around with history in his time-traveling DeLorean DMC-12.)

(During catastrophes, the Doctor will tell his accompaniments to calm down, like he did Brown. Brown has a fear of messing up time and history, and he normally panics about messing up the timeline.)

(Doc Brown's greatest fear is creating a hole in the fabric of history, altering its movement. The Doctor, however, is saying that he's not going to create one.)

Actually, it's a lot more like a rug, really…oh well, never mind.

(When his friends get confused and ask the Doctor on time travel and its effects, he will try to explain it, but it tends to still not make sense. He believes Doc Brown wouldn't grasp this concept and scraps the lecture. As a rug is made of fabric, it's a play on the previously used phrase "fabric of space and time". It's also a reference to his infamous "wibbly-wobbly timey-wimey" speech from the episode "Blink", where he attempts to explain the non-linear properties of space-time.)

Great Scott! You're great…not! I spit it hot,

("Great Scott!" is the Doc's catchphrase. It is also a reference to David Tennant, the actor who portrays the Tenth Doctor in the television show, as he is Scottish. He says the Doctor is great, but takes it back by saying "Not!", which is a form of insult used in the 1980s, when the Back to the Future trilogy was made. Brown also claims he can spit out hot rhymes.)

(In the movies, the DeLorean time machine requires 1.21 gigawatts of power in order to time travel: a tremendous amount of power. Doc Brown says he can rap with much more power than that. He also mispronounces it as "jigawatts", as the movie version of Brown did.)

I'm not sure what sort of scientific authority you purport to be,

(Doc Brown isn't quite sure where or how the Doctor got his knowledge of space-time physics. Neither can he identify the disciplines that make the Doctor an authority on the subject. For now, the Doctor's explanations have Brown looking for answers.)

But I'm a real doctor! Where'd you get your degree?

(Doc Brown has a degree in all science areas whereas "the Doctor" gives himself the title, as he wishes to help others as a doctor does, instead of having an official PhD. Although, he did claim to have a doctorate ID in some areas, attended medical school in the 19th century, and is shown to display detailed medical knowledge.)

Despite all your companions, you couldn't be having less sex.

(The Doctor has many companions, people who travel with him throughout time and space, many of which are normal, everyday people who tend to be female, though his relationship with each of them has been platonic, meaning that each companion is attracted to him, but does not desire more than friendship.)

I don't know what's lamer: your fans or your special effects!

(Doctor Who fans tend to be very fond of the series, making some of its large fanbase to be sci-fi nerds. The special effects used in the earlier seasons were low-budget and noticeably bad, so Doc Brown says his fans are just as terrible as the show's previous effects. In the video, Doctor Who's special effects are taunted by showing a visible hand flying the TARDIS around on a string, demonstrating the use of cheap special effects.)

You don't get another turn to debate. Time to face your permanent fate!

(Every time the Doctor is in a bad situation, he tries to keep debating with whoever is threatening him. Doc Brown is going to exterminate the Doctor so that he won't be able to rap a second verse.)

(Pun on the word Dalek: he is telling the Doctor to lick his testicles. The Daleks are an evil alien cyborg species in Doctor Who and a major enemy of the Doctor, seen often in the course of every one of the show's seasons.)

(A Dalek comes in by Doc Brown's command, firing a laser beam at the Doctor. "Exterminate" is the Daleks' catchphrase.)

(The Doctor has been killed numerous times throughout the series, but to keep the show going, he can regenerate into a new version of the Doctor upon death. This new form looks physically different, but has all the memories of the other past Doctors.)

(He's at the point of becoming another Doctor.)

Prepare to meet your…

[Regenerates into the Fourth Doctor]

(Having turned into a new form, the Doctor changes what he looks like when he regenerates.)

(Doc Brown, an old man, spends a lot of time with a high school boy (Marty McFly), which could be hinting towards a pedophilic relationship. The Doctor could actually make it possible for the Doc to never have been born since he is a time lord, and with all the meddling with the timeline, Doc Brown always feared he could cause a change that vanishes him out of existence.)

("Knickers" is what the British call women's undergarments, specifically panties, and to get those in a twist means you're letting something bother you. The Doctor is using the word Piccadilly (referring to London's Piccadilly roadway and to the First Doctor, William Hartnell, and his feature film entitled "Piccadilly Third Stop") as an innuendo for a penis, so this means Doc Brown is mad at getting beaten. The Doctor claims he's not like Doc Brown, who's losing the battle.)

(The Doctor is saying that Hill Valley is a rural hillbilly town. Oedipal comes from Oedipus, a Greek who heard a prophecy about him killing his father and marrying his mother. He was exiled from home to be kept from doing so, but in the end, he did so without even knowing. The Fourth Doctor uses this to say that Marty almost had sex with his mother, and he is also poking fun at the fact that Marty McFly hates to be called a chicken.)

Nobody calls me chicken!

(This references to what Marty said in Back to the Future movies whenever someone said he was "chicken".)

This is between us, Scarfy! Don't try to out-rhyme me!

(This battle is between the Doc and the Doctor, and Doc Brown doesn't want the Doctor to get Marty involved. The Fourth Doctor is known for his iconic scarf, so Brown calls him "Scarfy" to mock his fashion. Doc is telling the Doctor that he shouldn't try to win the rap battle against him.)

You'll find I'm as grimy as any slimy time limey!

(Brown is stating he's just as good as rapping a mean time-traveling rapper, like the Doctor. Limey is slang for British people, and since Doctor Who is a British television show, Brown says the Doctor is a limey as well.)

I'll use your port-o-potty time machine as my latrine!

(The TARDIS, the Doctor's time-traveling machine, is shaped like a 1960's police box, and Brown says it resembles a port-o-potty, a boxed portable toilet in the United States that is commonly blue as well, usually used on construction sites. Latrine is also another word for bathroom.)

You're not a cat with nine lives. You're a pussy with thirteen!

(The Doctor can regenerate 12 times, giving him a total of 13 lives. A common expression is that cats have nine lives, meaning they're known for usually being lucky in dangerous situations, and Doc Brown is saying that the Doctor is weaker than a cat, because he needs more than 9 lives just to survive. He also calls him a pussy, another word for cat, but it is also another word for a weakling.)

Ooh, actually, if you don't mind, it's just "the Doctor"…

(The battle loops back in time, a reference to the time-traveling done in both science-fiction series, but the Tenth Doctor uses his sonic screwdriver to end the battle before it continues again, both eliminating Doc Brown's successes and (more importantly) causing his death and regeneration to retroactively not exist.)

Retrieved from "https://epicrapbattlesofhistory.fandom.com/wiki/Doc_Brown_vs_Doctor_Who/Rap_Meanings?oldid=1463313"
Community content is available under CC-BY-SA unless otherwise noted.