The Doctor is the protagonist of the popular British BBC science-fiction television series Doctor Who, which first aired November 23, 1963. The Doctor was introduced as a Time Lord: a time-traveling, humanoid alien who came from the planet Gallifrey, in the constellation of Kasterborous. So far, the Doctor has been officially portrayed by fourteen different actors, and one actress. When the Doctor is critically injured, he can regenerate his body, resulting in a new appearance and personality. In all incarnations, the Doctor travels the known universe in a TARDIS (Time And Relative Dimension In Space) to fight injustice. The Doctor has battled many enemies such as the Daleks, Cybermen, an evil Time Lord named the Master/Missy, Weeping Angels, the Silence, Silurians, Zygons, and many others. The Doctor has also allied with Brigadier Lethbridge-Stewart, UNIT, and River Song, and have traveled with Sarah Jane Smith, K-9 (a robotic dog), Rose Tyler, Amy Pond, Rory Williams, Clara Oswald, and many others. In her present life, the Doctor travels with two associates, including Yasmin "Yaz" Khan from her most recent adventures.

The Doctor's tool of choice is the sonic screwdriver, a device shown to break codes, unlock doors, and otherwise manipulate matter in its immediate range. Also in the Doctor's possession is the psychic paper, a mysterious ID card that lets the Doctor imprint any identity required to overcome local authorities, just by having them glance at it. The Doctor is very just and noble, sometimes rescuing clear foes when they are in peril. The Doctor is also extremely compassionate towards his/her companions, but is not afraid to draw the line, returning them home if need be. Due to the immense popularity of the series, the fans of the show began to be called "Whovians".

Brilliant! An audio-visual aggressive rhyming contest where – oh, who am I? You, my friend, can just call me "the Doctor." I'm a Time Lord (a centuries-old alien) and I travel through time and space in a non-traditional time machine – the TARDIS, er, well, I guess to you it just looks like a 1960's-style British Police telephone booth. It's bigger on the inside. [A pretty-ish British girl runs by screaming, chased by some kind of creature.] Ah, that's just my latest companion – I'm always traveling with someone or another in a consistently platonic way. "Doctor Who", the television show based on my life, was produced by the BBC and has been running sporadically since the 1960's. Massive audiences tune in to watch me go toe-to-toe with enemies with low-budget special-effects like the Cybermen and the Daleks–who actually, really, had what looked like a toilet plunger as part of their design. As a Time Lord, I can regenerate if I'm critically wounded and "recast" myself with a new personality and physical form up to thirteen times.

Appearance in the rap battles (cameo)

The Fourth Doctor, alongside Leonidas and Macho Man Randy Savage, appeared on a passing speeder at the very beginning of the battle.

The Fourth Doctor briefly appeared on Pablo Picasso's television screen at the end of his second verse.

Doesn't even really matter who.

Who am I even talking to? Oh yes, you!

Actually, it's a lot more like a rug, really. (Oh well.) Never mind.

[The Tenth Doctor regenerates into the Fourth Doctor.]

[The Doctor uses his sonic screwdriver to switch off the battle and go to the end slate.] 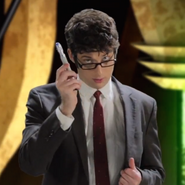 The Tenth Doctor with the sonic screwdriver 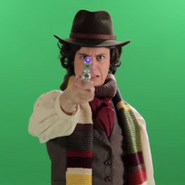 A picture of the Tenth Doctor posted on ERB's Facebook page