Donald John Trump, Sr. was born on June 14th, 1946, in Queens, New York. He was the 45th President of the United States of America. He is also a real estate mogul, investor, author, and billionaire, as well as former host of NBC reality show The Apprentice and its sequel series The Celebrity Apprentice. Trump is widely considered as one of the most renowned real estate entrepreneurs in the United States.

It is believed that Trump was heavily influenced by his father in his decision to start a career in real estate investment. He worked for his father's firm, Elizabeth Trump & Son, while attending the Wharton School of the University of Pennsylvania. He was given control of the company in 1971 and renamed it The Trump Organization. Shortly afterwards, Trump moved his residence to Manhattan, where he became familiar with many influential people. Convinced of the economic opportunity in the city, he became involved in large building projects that would offer opportunities for earning high profits, using attractive architectural design and winning public recognition.

Although he ran an unsuccessful campaign in 2000, Trump expressed an interest in becoming a candidate for President of the United States in the 2012 election two years before it began, though on May 2011, he announced he would not be running. In 2013, Trump decided to spend over $1 million to research a possible run for President of the United States in 2016. On June 16th, 2015, he announced that he would officially be a candidate for the 2016 election. Despite that Trump spent much of his campaign attacking more than a dozen Republican contenders, he handily won his party's nomination on a platform of aggressive populism, nationalism, and the promise of restoring an economy weakened by globalization.

On June 15th, 2016, Trump selected Indiana governor Mike Pence to be his running mate. On November 8th, Trump defeated Hillary Clinton in the general election, despite losing the popular vote. He was inaugurated as the 45th President of the United States on January 20th, 2017.

Trump's term as President was fraught with contention, if not outright controversy; in his first two years, his administration experienced extremely high turnover within its cabinet. Further, Trump reversed many of his predecessors' economic and foreign-policy decisions, as well as making controversial appointments to the Supreme Court of the United States and instituting protectionist trade and immigration policies with little oversight from Congress.

Trump was impeached on charges of obstruction and abuse of power in attempting to withhold congressionally approved funding for Ukraine in return for an announcement of an investigation on 2020 Democratic candidate and former Vice President Joseph R. Biden, Jr. On February 5th, 2020, Trump was acquitted on both charges in what was seen as a party-line vote, as there was not enough evidence to justify "high crimes and misdemeanors" as defined in the Constitution.

After a contentious election process that extended for four days, Trump was projected to be defeated by Biden as of Saturday, November 7, 2020. Trump has since refused to acknowledge the outcome, filing dozens of legal challenges in key battleground states in a coordinated attempt to overturn his loss. Though unsuccessful in making his intended impact, Trump managed to delay Biden's transition by two weeks.

As of January 7, 2021, despite rioting intended to halt procedural affirmation, Donald Trump was officially defeated by Joe Biden. On January 9, Trump was suspended from using mainstream social media on grounds of potentially spurring more dangerous activity. He was again impeached as of January 13, 2021 on one charge of inciting sedition, becoming the only sitting president to be charged twice in the same term. However, he was acquitted in February 2021 on spurious grounds that impeachment of a former president was unconstitutional (it was not, per definition). He left office on January 20th, 2021, being succeeded by Joe Biden. His administration was widely considered to be one of the worst in recent American history.

Even Jay-Z knows what a pimp I am! I got my name on the front of the business, man!

My raps will haunt you; make you think you're going insane!

You're about to get whooped by three emcees of the ethereal plane!

[Note: Donald Trump is in red, while the bald eagle is in regular text.]

Let me just say I respect all females,

But your rhymes are trash; put 'em next to your emails.

Our country's in crisis. Who wants to vote for the mother of ISIS?

That might not be exactly true, but I don't do politeness.

(Believe me.) You wanna talk about misogyny? Your Bill's worse than Cosby!

He left a mess on that dress like you left in Benghazi!

(Terrible!) You wanna break the glass ceiling, Hillary. I sense it,

But the only crack you'll find is my ass pressed against it!

The numbers are in, and I'm right on your tail!

You don't have the stamina, baby; you're frail!

But Trump will appoint you to jail!

And you almost lost the primary to a socialist Jew!

What do the American people gotta yankee doodle do

To get it through your fat face that they're just not that into you?

They want a strong, male leader who can stand up to China.

I'm gonna run these streets like I run my casinos:

While you bury us in debt buying poor people socks,

Then I'll use all the best rocks from the site to build a wall!

Dip it in gold and make Mexico pay for it all!

I'll tell Congress, "You're fired," and put Charles in charge!

'Cause this whole system's rigged, and we all know the riggers!

For the last eight years, this country's been run by— (CAW!)

[Note: Donald Trump is in red, while Joe Biden is in regular text.]

The Teflon Don on the White House lawn!

Against wimps like you, I'll win a third term.

Think looting and violence will keep the MAGA movement quiet?

Why don't you step behind the gym? I'll be standing by.

We'll see how tough you are against the 45! Uh!

I'll shoot a hole through your whole party,

Bigger than the one I blew through Qasem Soleimani! Ugh!

Then I go and bone on Melania! Ugh!

I've got all the best cognition, with all the top grammar,

I'm not a little girl's shoulders, so you can't touch this, MC Stammer!

You're a disaster, inciting hysteria!

You're just Barack's shadow, and I don't really like the shade!

I'm not a communist, I'm not a socialist, I'm just an old ass man with some decency! Wrong!

The only thing getting fired on my watch is tear gas from law enforcement.

Meh! They impeached me, I still walked out of DC looking peachy!

You got the sloppy, Joe, but no beef!

The only white privilege I see are those teeth!

Maybe teach your son a thing or two about life,

Like there's no hunting season for your dead brother's wife!

You and your mask and your Knight Rider shades

There's no blue wave, forget it, not coming!

You're like a picture of my ex-wife in a bikini, 'cause you disgust me!

So when the clock strikes, prepare to enter your world of Christmas pain.

[Note: Donald Trump is in red, while Bernie Sanders is in regular text.]

Our country's in crisis

And the Democrats nominate the founder of ISIS?

There's no time to be nice anymore;

Terrorists are knocking right on our doors!

Crooked Hillary might be above the law, but she won't be above my border!

Then Trump will be her personal server—one that she can't delete by the way, believe me!

A vote for me in the end is a promise my slogan will start making sense.

Hillary for the Pillory! Lock her up to Make America Great Again!

The system is rigged! Ladies and gentlemen! Just look at this poor communist…

You were hopeless, it was obvious!

So for every vote that didn't count,

You can't complain if you help them out.

If I lose this race, that's it!

Both Mexico and Hillary are going to pay for it!

You're disqualified to be President 'cause you're lying more than Ted ever did!

If you take away the vagina, you wouldn't last one day as a candidate!

This race is getting tighter, which is terrific, it's great, who would have known?

Since your husband loves them women when they're going down the polls!

This hack will cough our country away;

The first lady to croak the first day!

While I'm running on both my fan base my brand name,

This crippled witch will be walking with Kaine!

I'm no conspiracy theorist, but there might be some tyranny near us…

I'm not saying Hillary's a terrorist, but she's probably a terrorist.

So there is only one strong man, only one wall plan,

Only one Trump to single handedly bring jobs back!

An American, I'm proud to be! A politician, you have to be!

While Americans were stranded and counting on you, you were sound asleep, just counting sheep!

The United States is the master race!

When these illegals pack and get shipped away

THERE'LL BE SO MUCH WINNING!

YOU'LL GET BORDER AND BORDER OF WINNING!

In the Bible, the Savior beats Satan. I've read it!

Little Red LYING hood and her basket of DEPORTABLES

And I know that's not exactly true, but I don't do politeness.

They want a strong, male leader that can stand up to China.

I'm gonna run these streets just like I run my casinos:

I'm gonna use my wrecking balls to tear down some mosques!

And I'll use the rocks from the site to build a wall!

And I'll make Mexico pay for it all!

Hillary Clinton's title card, where Trump can be seen in the back

Trump walking past the "VS" screen 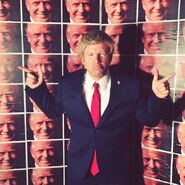 Lloyd dressed as Trump for Halloween 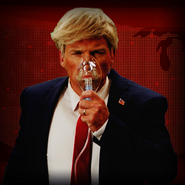 A picture of Trump wearing a gas mask, uploaded on ERB's community tab

All portrayals of Trump posted on the ERB youtube community tab.