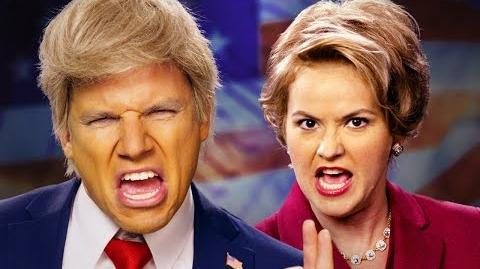 Alexander the Great vs Ivan the Terrible

Donald Trump vs Hillary Clinton is the sixty-fifth installment of Epic Rap Battles of History and the seventh episode of Season 5. It features American business magnate and Republican 45th President of the United States, Donald Trump, rapping against former U.S. Secretary of State and Democratic presidential candidate, Hillary Clinton, along with a surprise entry from the 16th President of the United States and previous ERB participant, Abe Lincoln. It was released on October 26th, 2016.

This battle is a spiritual sequel to 2012's Barack Obama vs Mitt Romney, as it is the second U.S. election-themed battle. It is followed by 2020's Donald Trump vs Joe Biden.

EpicLLOYD as a bald eagle (voice only)

[Note: Hillary Clinton is in blue, Donald Trump is in red, Abe Lincoln is in gray, the Secret Service agent is in brown, and the bald eagle is in italics.]

I've been in this game too long; I'm a public servant!

Have been since I met MLK in person!

I'm a woman of the people; that's for certain!

You're a man of the people who don't like turbans!

I was living in the West Wing while you were professional wrestling!

You got skin like Russian dressing from too much Russian investing!

You been going bankrupt since the 90s! If I was in Iran, you couldn't find me!

You don't care about the job, Trump! You just think the desk is shiny!

I said that I respect your children, but that wasn't quite right, yo!

First name is Hillary, middle name Rodham, last name is Clinton, and lyrics, I got 'em!

How do I say this? You're racist!

Ooh, you must get so pissed that your hands are too small to stop and frisk!

So you use your fingers to touch chicks!

That's your daughter. "Well, grab her by the pussy!"

Don't tell me the victim's at fault, sucka!

But the ones on the 8th are great, mutha fucka!

Better save the date; I'm gonna rock the vote!

Bad bitch on the scene like Murder, She Wrote!

So go ahead, Donald! Let me see you flow!

Let me just say I respect all females,

But your rhymes are trash; put 'em next to your emails.

Our country's in crisis. Who wants to vote for the mother of ISIS?

That might not be exactly true, but I don't do politeness.

(Believe me.) You wanna talk about misogyny? Your Bill's worse than Cosby!

He left a mess on that dress like you left in Benghazi!

(Terrible!) You wanna break the glass ceiling. Hillary, I sense it,

But the only crack you'll find is my ass pressed against it!

The numbers are in, and I'm right on your tail!

You don't have the stamina, baby; you're frail!

But Trump will appoint you to jail!

And you almost lost the primary to a socialist Jew!

What do the American people gotta yankee doodle do

To get it through your fat face that they're just not that into you?

They want a strong, male leader who can stand up to China.

I'm gonna run these streets like I run my casinos:

While you bury us in debt buying poor people socks,

Then I'll use all the best rocks from the site to build a wall!

Dip it in gold and make Mexico pay for it all!

I'll tell Congress, "You're fired," and put Charles in charge!

'Cause this whole system's rigged, and we all know the riggers!

For the last eight years, this country's been run by— (CAW!)

Are you fucking kidding me with this blah blah blah?!

I've half a mind to feed you both to my oversized— (CAW!)

You two got brother blocking brother on their Facebook feed!

I'm so sick and tired of this ridiculous shit!

If this is the best my party gets, then my party should quit!

(Ha!) I'm sorry, did I say something that you found funny?

Wipe that creepy-ass smile off your face and beat this dummy!

And if she does win the White House, be a man and hold the door!

Don't get your fans stirred up in some sorta Twitter civil war!

Here's an equal opportunity smack down in the sequel!

[Note: Hillary Clinton is in blue, Donald Trump is in red, Bernie Sanders is in light blue, Ronald Reagan is in brown, and Abe Lincoln is in gray.]

Thank you for choosing me as your nominee,

I thought this would be harder, honestly.

But here we are! One step away

From a woman taking the global stage.

So America now has two options:

One who we know can get the job done

But caution! One's an orange hot head conman trying to buy our problems!

This is my domain! It's eminent!

You won the base of the confederate's electorate!

The way you've acted with arrogance proves your temper meant you don't have the temperament!

America needs some feminine leading, from a mother, a wife's kind of healing.

The most qualified candidate in history will break your face like a glass ceiling!

Our country's in crisis

And the Democrats nominate the founder of ISIS?

There's no time to be nice anymore;

Terrorists are knocking right on our doors!

Crooked Hillary might be above the law, but she won't be above my border!

Then Trump will be her personal server—one that she can't delete by the way, believe me!

A vote for me in the end is a promise my slogan will start making sense.

Hillary for the Pillory! Lock her up to Make America Great Again!

Your vision of the good 'ol days is when hard working citizens used to be slaved in chains!

You're too vague! Your campaign is one short statement based on shameless racist hatred.

Who knew such a small man could be such a bigot ignoramus?

But this liar *cough* is feeding these racist meme henchmen

What kind of decent businessman *sips water* has his own team against him?

But what difference does it make?

With that judgment, you'll fumble our country away!

If those tiny fingers are on the button, you'll ignore that this world is unaffordable.

You say that I'm Satan? I'll send you to hell in a hand basket of your deplorables!

What's next, rape? You want to "Make America Hate"!

If there's anything that you raised right it's the stakes on November 8!

This November, remember, we can't put his tiny finger on the button

Where is my fair share of raps that I earned?

If Bernie got a turn, you would all Feel the Bern!

The system is rigged! Ladies and gentlemen! Just look at this poor communist…

You were hopeless, it was obvious!

So for every vote that didn't count,

You can't complain if you help them out.

If I lose this race, that's it!

Both Mexico and Hillary are going to pay for it!

You're disqualified to be President 'cause you're lying more than Ted ever did!

If you take away the vagina, you wouldn't last one day as a candidate!

This race is getting tighter, which is terrific, it's great, who would have known?

Since your husband loves them women when they're going down the polls!

This hack will cough our country away;

The first lady to croak the first day!

While I'm running on both my fan base my brand name,

This crippled witch will be walking with Kaine!

I'm no conspiracy theorist, but there might be some tyranny near us…

I'm not saying Hillary's a terrorist, but she's probably a terrorist.

So there is only one strong man, only one wall plan,

Only one Trump to single handedly bring jobs back!

An American, I'm proud to be! A politician, you have to be!

While Americans were stranded and counting on you, you were sound asleep, just counting sheep!

The United States is the master race!

When these illegals pack and get shipped away

THERE'LL BE SO MUCH WINNING!

YOU'LL GET BORDER AND BORDER OF WINNING!

In the Bible, the Savior beats Satan. I've read it!

Little Red LYING hood and her basket of DEPORTABLES

Mr. Trump, tear down this wall!

Let me give you an actual lesson in capitalism

On your hat, it is written what I had envisioned!

You turned the G.O.P. into a Grandad's Old Party!

What resembles a republic in this Republican?

By nations that suppress gays and women just for the sake of hatred!

And you silence the ones who dissent

From being trapped in your husband's bed

And you couldn't care less!

You'll use executive orders to have our amendments killed

Since you're not for free speech when you gotta pay the Bill!

So, to make my choice, I'll flip a coin, and no matter if tails or heads

Two of the wealthiest Americans still won't make any cents!

You don't know shit about the job, Trump! You just think the desk is shiny!

And I know that's not exactly true, but I don't do politeness.

They want a strong, male leader that can stand up to China.

I'm gonna run these streets just like I run my casinos:

I'm gonna use my wrecking balls to tear down some mosques!

And I'll use the rocks from the site to build a wall!

And I'll make Mexico pay for it all!

A democracy is not when the population chooses

Between the least disgusting of two sloppy, wet deuces!

If this is the best my party's got, then my party should quit!

You better wipe that fake smile off your face and beat this dummy!

And when she wins the White House, be a man and hold the door! 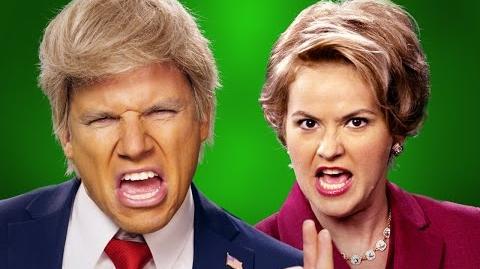 Donald Trump vs Hillary Clinton - ERB Behind the Scenes 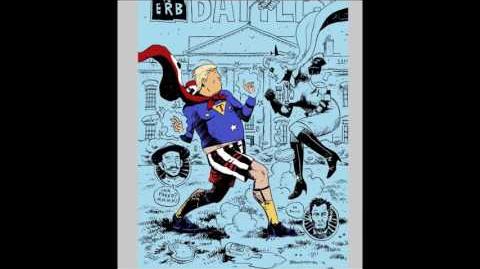 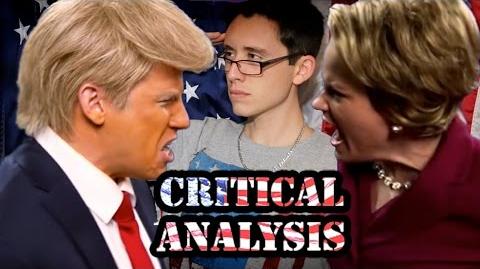 Retrieved from "https://epicrapbattlesofhistory.fandom.com/wiki/Donald_Trump_vs_Hillary_Clinton?oldid=1493800"
Community content is available under CC-BY-SA unless otherwise noted.